Serba Dinamik in face-off with regulators 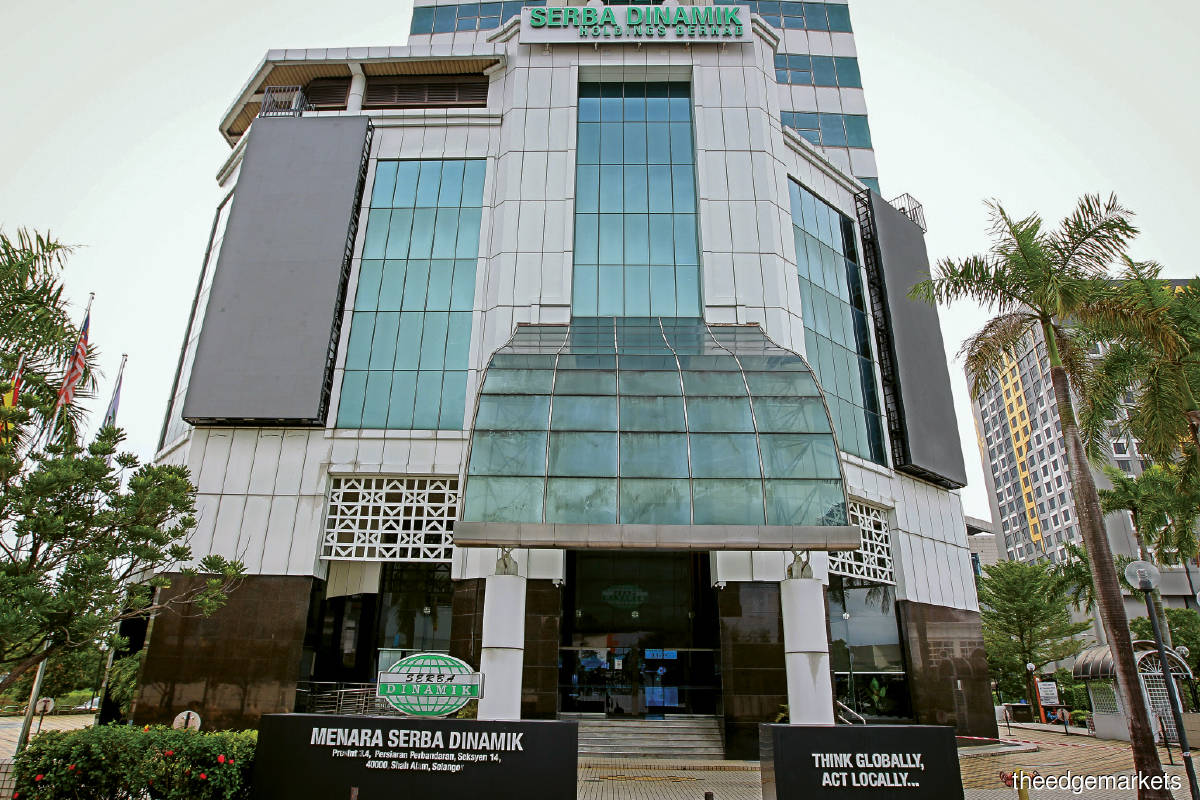 IS Serba Dinamik Holdings Bhd sliding down a slippery slope, or will the company’s management be vindicated, and some semblance of normalcy return to the beleaguered oil and gas outfit?

While the problems at the company first came to light in May, last week proved significantly challenging with consistent negative news flow, including that it was seeking legal redress against the frontline capital market regulator Bursa Malaysia Bhd. One market watcher says of the pickle the company is currently in: “Clearly, it would appear that Serba Dinamik has stuff to hide and is buying time.”

However, while an increasing number of people are sceptical of Serba Dinamik’s innocence, it has its fair share of sympathisers as well.

Last week, the company failed in its bid to obtain an interim injunction against Bursa Malaysia and Ernst & Young Consulting Sdn Bhd (EY) to prevent them from releasing a special independent review (SIR) on the findings on Serba Dinamik.

To recap, Serba Dinamik is seeking legal recourse against Bursa Malaysia, EY and its original auditors KPMG. The problems at the company began after KPMG in May flagged what it alleged were more than RM4.54 billion in questionable transactions.

Serba Dinamik executives have vehemently denied any wrongdoing, and have been trying to withhold the contents of EY’s findings, suggesting that the SIR is “preliminary and inconclusive”. The oil and gas company has also questioned Bursa Malaysia’s suspension of its stock.

Worst hit are likely to be the minority shareholders, who are powerless as the stock remains suspended. The company’s market capitalisation has plunged — from RM6 billion prior to the issues surfacing to RM1.3 billion, at its price of 35 sen per share when the suspension took place. Minority Shareholders Watch Group (MSWG) CEO Devanesan Evanson said in a weekly newsletter last Friday, “As Serba Dinamik has taken legal action against Bursa Malaysia (and EY), the issue is now in the realm of the courts and MSWG awaits the timely resolution of the case in the interest of minority shareholders.”

Serba Dinamik did not reply to questions from The Edge for this article. Nevertheless, the pressure seems to be mounting on the company, which was once an investors’ darling in the oil and gas sector.

Last Thursday, Securities Commission Malaysia (SC) came out to explain that it had “conducted a raid on May 18, 2021, to secure documents and relevant evidence from several Serba Dinamik offices following a Section 320 Capital Markets and Services Act 2007 (CMSA) notice issued to the SC by KPMG”.

Section 320 of the CMSA says that if an auditor “is of the professional opinion that there has been a breach or non-performance of any requirement or provision of the securities laws, a breach of any of the rules of the stock exchange or any matter which may adversely affect to a material extent the financial position of the listed corporation, the auditor shall immediately submit a written report on the matter”.

Section 320(2) seems to provide auditors with immunity. It states that “No auditor shall be liable to be sued in any court for any report submitted by the auditor in good faith and in the intended performance of any duty imposed on the auditor”.

As such, Serba Dinamik’s case against KPMG could be an uphill task unless it manages to prove that the auditor did not act in good faith.

In the case of EY, which was brought in after KPMG flagged the issues, the SC says it had granted EY access to documents it had seized as the latter was having difficulties obtaining complete documentation from Serba Dinamik on several aspects of its review.

Meanwhile, Section 152 of the Securities Commission Malaysia Act 1993 (SCMA) allows the SC to require any person to disclose to it information it deems “expedient” for the administration of the securities laws. The SC, in an email response, says that it had issued a Section 152 SCMA notice to require EY to disclose its SIR findings for its review.

“The SC has made progress on its investigation and additional resources have been added to the team to ensure the investigation is completed in a timely manner,” the SC added.

Issues with Bursa and EY

Serba Dinamik’s action against the local bourse is odd considering that Section 376 of the CMSA says that no civil liability shall be incurred by a stock exchange, where such act, statement or omission was done in good faith.

Bursa Malaysia had suspended trading in Serba Dinamik shares since Oct 22, after the oil and gas counter failed to announce a Factual Findings Update on the SIR undertaken by EY.

In a nutshell, Serba Dinamik says that according to the Main Market Listing Requirements (MMLR) and CMSA, Bursa Malaysia’s instruction to appoint EY at end-June, and once again in early July to undertake the SIR, is in excess of power, null and void and of no effect, as is the instruction to announce EY’s Factual Findings Update. Similar arguments have been given for Bursa Malaysia’s suspension of Serba Dinamik’s stock.

Serba Dinamik sought to restrain Bursa Malaysia from issuing any instructions to it to undertake any special independent review or any review or investigation into the affairs of the company or its units, and even questioned if EY was being an auditor within the meaning of “auditor” in the MMLR.

The company also sought to restrain EY from releasing and disseminating its findings on Serba Dinamik, which certain quarters say is the crux of all the legal wrangling.

EY, meanwhile, said: “EY was appointed by the board of directors of Serba Dinamik to undertake a Special Independent Review, under the directive of Bursa Malaysia.

“We disagree with the position taken by Serba Dinamik. We undertook our duties professionally and stand by all our actions to date.”

Last week, news broke that Serba Dinamik had missed a semi-annual coupon payment due on Nov 9, 2021, for its US$300 million dollar sukuk maturing in May 2022.

The company clarified that the coupon payment was US$7 million and not US$9.45 million as reported and highlighted that it had a 30-day period from the non-payment due date to pay the overdue coupon obligations before triggering an event of default.

The company said that it has “no intention to default on the coupon payment and is taking all necessary steps to remedy the matter within the stipulated timeline … Serba Dinamik is committed to fulfil the said payment subject to receipt from our customers”.

Nevertheless, Fitch downgraded the company’s rating on the senior unsecured sukuk due May 2022 and March 2025 to C, from CCC-, with the Recovery Rating remaining at RR4. A Recovery Rating of RR4 indicates a recovery rate of 31% to 50% of principal and related interest.

In addition, last Wednesday, Serba Dinamik forfeited RM2.42 million that was paid as a 10% deposit for the proposed purchase of an eight-storey office building in Block 12, Corporate Park, Star Sentral @ Cyberjaya, in Putrajaya. AwanBiru Technology Bhd (formerly known as Prestariang Bhd) announced that it had mutually called off the RM24.2 million sale after Serba Dinamik failed to complete the terms of the sale and purchase agreement inked in February this year.

However, according to AwanBiru, Serba Dinamik will be allowed to purchase the building at the same price of RM24.2 million on or before April 30, 2022, less a discount of up to RM2.4 million.

In early May, Serba Dinamik sponsored Data Knights Acquisition Corp, a special-purpose acquisition company (Spac) listed on the Nasdaq in the US.

“The company plans to leverage its management team’s experience and target the data centres and internet technology sectors, focusing on businesses built on disruptive technologies and business platforms,” Serba Dinamik had said then.

In an announcement on May 7, Serba Dinamik said that its investment in Data Knights was about US$5.85 million (RM24.1 million), and the company was looking to raise as much as US$115 million.

“Pursuant to this sponsorship, Serba Dinamik will be in a good position to benefit from the attractive returns in view of its early entry into SPAC, while at the same time create opportunities for the group to expand its business activities into the US market with access to a larger pool of investors,” Serba Dinamik added.

Whether the Spac will be adversely impacted with its sponsor mired in difficulties remains to be seen.

Prior to the suspension on Oct 22, its directors had been acquiring shares of the company, while managing director and CEO Datuk Mohd Abdul Karim Abdullah disposed of his block of more than 107 million warrants for RM4.3 million. Other directors of Serba Dinamik such as Datuk Awang Daud Awang Putera, who is a non-independent non-executive director, had been selling shares prior to the suspension while another non-independent non-executive director, Datuk Abdul Kadier Sahib, had been acquiring shares in the company.

In an email response to The Edge, Bursa Malaysia says, “Bursa Malaysia noted that such transactions have taken place and will be looking into them.”