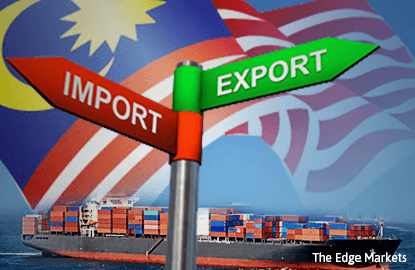 KUALA LUMPUR (Nov 6): Malaysia’s exports in September 2015 rose 8.8% to RM70.2 billion, from RM64.5 billion a year ago, the Department of Statistics said, surpassing the Bloomberg consensus forecast for 3.3% growth.

Trade surplus, or the difference between exports and imports, totalled RM9.7 billion, which was 4.1% or RM381.2 million, from a year earlier. However, it fell 4.6% or RM471.7 million from the previous month.

According to the Department of Statistics, the main products contributing to the export growth were electrical and electronics (E&E) products, timber and timber-based products, and natural rubber.

As expected, there were declines in crude oil based products and derivatives. Liquefied natural gas dropped by a third or RM1.7 billion year-on-year to RM3.4 billion, due to drops in average unit value and export volume.

While refined petroleum products’ export volume rose 20.2%, there was still a 4.7% decline in the products’ total exports to RM3.3 billion, because of a 35.1% fall in average unit value.

“Exports of palm oil, the major commodity in this group of products, fell RM373.0 million or 8.7% and this was attributed to the drop in both export volume, by 6.8%, and average unit value, by 2%,” said the Department of Statistics.

As for imports, the contributing factors to their growth were the rise in capital goods and consumption goods.

Consumption goods, meanwhile, rose 43.2% to RM5.7 billion, with major contributors to the growth being semi-durables; food and beverage, processed, mainly for household consumption; and non-durables.

China remains as the biggest trade partner, making up 15.7% of the total trade year-to-date. Trailing behind was Singapore at 13% and the European Union bloc at 10%.

Total exports year-to-date was RM568.2 billion, while total imports came to RM504.3 billion — indicating the trade surplus at roughly RM63.9 billion. China was the biggest consumer of Malaysia’s exports, making up 18.7% of the total figure. It was also the biggest importer to Malaysia, at 13.1%.