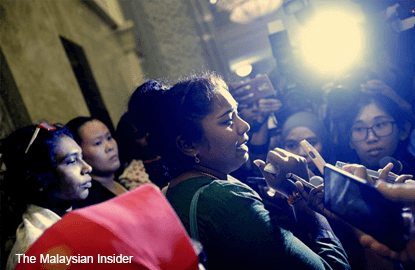 KUALA LUMPUR (Feb 12): Although the court decision to separate two siblings in a custody dispute as in the S. Deepa case is not unprecedented, lawyers, including family law practitioners, say it is not encouraged as the family will be torn apart.

The lawyers also expressed concern that the Federal Court judges decided to interview the siblings, Sharmila (Nurul Nabila) and Mithran (Nabil), before ruling on a custody dispute following the unilateral conversion of the children to Islam by their father Izwan Abdullah.

Lawyer Goh Siu Lin said the court would usually strive to keep the children together after interviewing the minors, going through reports from experts and the social welfare department.

“In deciding custody, the court will take into account the best interest of the child,” said Goh who is also president of Women Lawyers Association.

She said siblings should remain together although the parents were divorced.

On Wednesday, the apex court decided to vary the custody order of the High Court by giving eight-year-old Mithran to Izwan while Deepa retained daughter Sharmila, 11.

Panel chairman Tan Sri Raus Sharif said the substitute order was made as the children were settled in their present environment.

Lawyer K. Shanmuga said the bench had rewarded Izwan for abducting Mithran from the lawful custody of Deepa.

“Two years ago, the High Court considered all prevailing circumstances, including the father's character before ruling in favour of Deepa,” he said.

Lawyer Honey Tan Lay Ean said while it was heart-wrenching to see the siblings being separated, judges interviewing children was a matter that family law practitioners often struggled with.

“The Law Reform Act and the Convention on the Rights of the Child allow for children to have a say in where they are placed when their parents divorce, and that is only right,” she said.

She said in many jurisdictions like Singapore, the United Kingdom and Australia, judges do not usually interview children to ask them which parent they wanted to live with.

Tan said judges most usually made such decisions based on evidence from the parents, and reports from professionals like social workers, child psychologists or child psychiatrists, who would have spent hours speaking with the children.

“Judges are experts in law, not child psychology and welfare. It is traumatic for children to go to court, to be made to choose, and the environment in which they were forced to make that major decision in their lives.

“Who is going to counsel them now? To help them deal with guilt (for not choosing the other parent), and other sorts of fall-out from the court's decision,” said Tan, who is also a Bar Council member.

Lawyer Sharmila Sekaran said custody should be seen from the perspective of the child and not the parents.

“I don't know what consideration the bench took into account before deciding to vary the order,” she said.

The lawyer said it was still ambiguous who and how the interview with the children were conducted.

“Was it one of the five judges. all the five or the children met the judges individually?” said Sharmila, adding that she found it worrying and had issues on the matter.