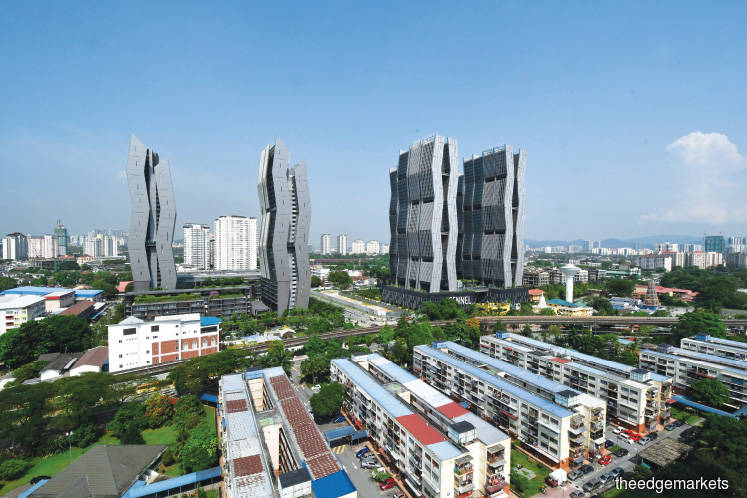 Sentul is a blend of the old and the new Sentul enjoys good rental prospects because of its close proximity to the well-known student-populated Setapak.” — Foo A former railway hub, Sentul is famous for its old-world charm, historical temples and prewar shops. It sits next to Setapak and has modernised alongside its neighbour over the years.

One of the key developers in Sentul is YTL Land and Development Bhd (YTL Land), which is part of YTL Group. In 2001, YTL Land unveiled its award-winning and ambitious urban regeneration project for the area — the Sentul Master Plan. The 294-acre tract was spilt into half by the Sentul KTM Komuter tracks, resulting in Sentul West and Sentul East. The 186-acre Sentul West comprises mainly residential properties while the 108-acre Sentul East features commercial developments.

Today, high-end residences such as The Saffron, The Fennel and Bayu Sentral come to mind when Sentul is mentioned. A structure that is fast becoming a landmark in the area is the Kuala Lumpur Performing Arts Centre, fondly known as klpac.

Developments in Sentul are not only by YTL Land. Mah Sing Group Bhd’s M Centura @ Sentul is due for completion in 2021, UOA Group’s Sentul Point in 2020 and C & G Maxim Sdn Bhd’s One Maxim next year.

“And the area continues to see new high-rise residential developments, of which a few are of the high-end serviced residence type,” he adds.

Foo expects to see Sentul benefit from the upcoming Sungai Buloh-Serdang-Putrajaya MRT (mass rapid transit) line, which will have a station in Sentul West.

The average selling price per sq ft in Sentul for non-landed and landed properties is RM310 and RM1,129 respectively, compared with the state’s average of RM396 and RM2,525.

Sentul was once home to thousands of railway workers, the majority of whom were Indians. They worked in Sentul Works, one of the largest industrial businesses in Malaya. Most of the historical structures in the area have been demolished but a few remain, including the Sentul Cinema, schools and old shoplots.

The prewar town, particularly Jalan Ipoh, is part of Federal Route 1, the first and one of the oldest federal roads in Malaysia. It was also the only trunk road for transporting tin supplies between Ipoh and Kuala Lumpur.

Located off Jalan Ipoh is the 35-acre community park, The Sentul Park, which is home to klpac. Once a railway workshop, it is now an art hub offering interesting activities in its studios and theatres.

There is also an urban transformation centre (UTC) here that provides key government and private sector services under one roof.

What has not changed in Sentul is its good food. In fact, the area is flooded with many old and new food and beverage outlets.

One of the best Chinese restaurants in the area is Lau Heong Seafood Restaurant, which has been around for more than 40 years and is currently managed by the family’s second generation. The restaurant is famous for its fresh seafood that is sourced mainly from the owner’s hometown in Perak. Some of the must-try speciality dishes here are Thai-style prawns and squids, fish head curry and fried chicken wings.

Another must-go-to restaurant is Samira by Asian Terrace. Located in Sentul Park, the restaurant offers irresistible, authentic Thai-Indochinese cuisine. Founded in 2008, the eatery is run by two sisters who love Thai food. It is situated in a unique wooden bungalow that offers stunning views of a beautiful lake. It is also the perfect venue for special occasions like weddings and corporate dinners.

Surrounded by lush greenery, the restaurant is filled with warm lights and cosy wooden furniture, giving it a romantic and peaceful ambience. One could savour tantalising delicacies such as Mieng Kam (Miang Kham) — a traditional Southeast Asian snack from Thailand and Laos — traditional Thai red curry with roasted duck and Vietnamese deep-fried yam salad at the restaurant.

For something spicier, head over to Sentul Banana Leaf Restaurant, which offers a wide variety of dishes and generous portions at affordable prices.