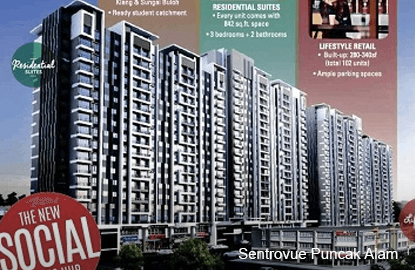 PETALING JAYA: Low-key developer Villa Avenue Housing Development Sdn Bhd saw a 55% take-up rate for the residential component of its maiden mixed-use project, Sentrovue, after the recent soft launch of one of its two residential towers. Sentrovue is located in Puncak Alam, Selangor,  and will feature two blocks of serviced apartments and a lifestyle retail area on the lower levels of the towers that sit on 2.1ha of leasehold land. Last weekend, the developer soft launched one of two blocks, offering 408 serviced apartment units on 19 storeys.

Villa Avenue told The Edge Property it is confident the first tower will sell well because it is the only high-rise project in the area and is considered affordable compared to landed homes there. The partly furnished units of the first tower are selling for RM226,000 to RM280,000 for units with a built-up area of 842 sq ft.

Sentrovue has a total gross development value of about RM230 million and is scheduled for completion in the fourth quarter of 2018. Facilities include a swimming and wading pool, gym, children’s playground, skating area, badminton court and a multipurpose hall.

The developer says the second block, which will have 390 units on 17 storeys, will be launched after the Hari Raya Aidilfitri holidays.

Sentrovue’s  lifestyle retail area comprises 102 retail units. The developer  describes them as low-cost retail lots which buyers can purchase by applying to the Selangor Housing and Real Estate Board.   — theeedgeproperty.com