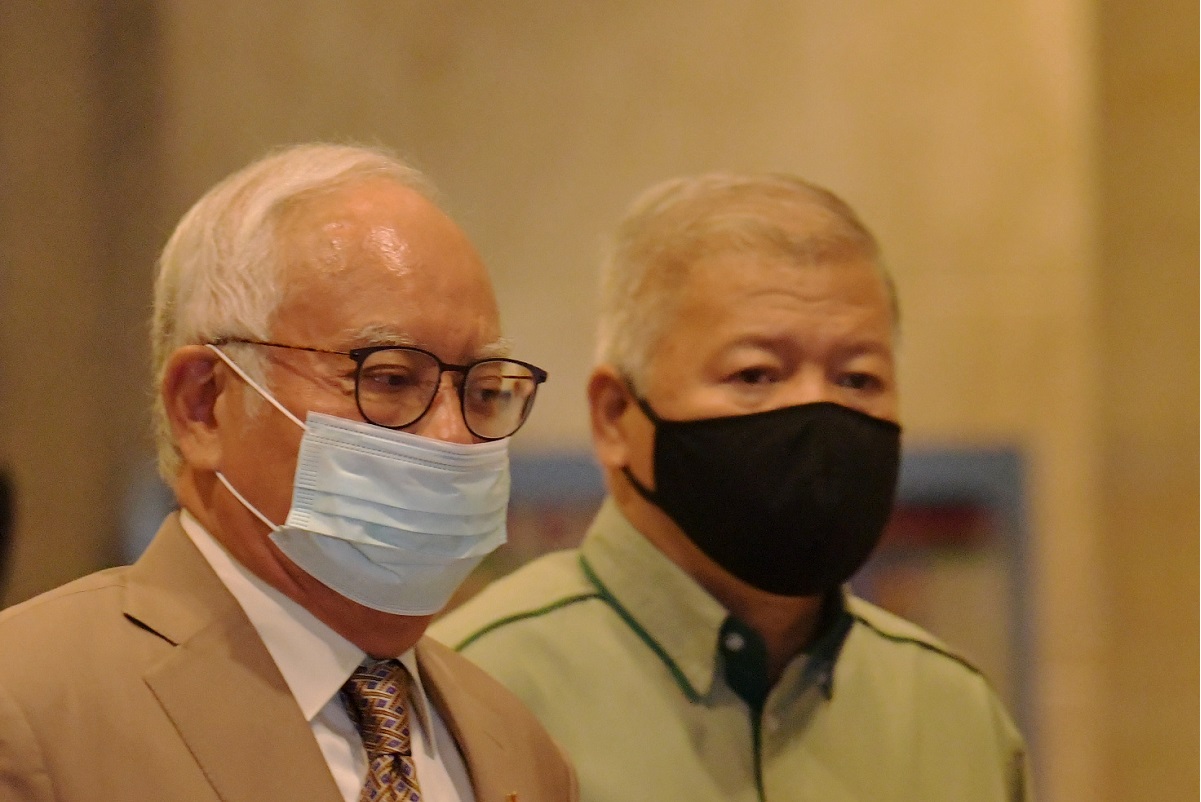 Shafee told the Court of Appeal that Justice Nazlan as a trial judge has not had any experience on criminal matters prior to handling the SRC International Sdn Bhd case that led to the former premier's conviction.

"This is the trial of the century where the whole world is watching. Yet we see an experienced criminal judge Datuk Mohd Soffian Abdul Razak being replaced with Justice Nazlan.

"We did ask the then Chief Judge of Malaya as to why this was done but the reply [is] that this was a routine transfer," said Shafee.

Justice Soffian, who now is a Court of Appeal judge, was the original judge who was supposed to preside over Najib's SRC trial, but he was replaced following discovery that his brother is a Pahang state executive councillor.

Shafee cited that in the first former Selangor menteri besar Datuk Harun Idris case, the then Raja Azlan Shah (later Sultan Azlan Shah) came from the Federal Court to preside in the case at the High Court.

At the second Harun case, former senior judge Eusoffee Abdoolcadeer came from the Federal Court to preside in the case, the senior lawyer said.

In the case of Datuk Mokhtar Hashim, who was charged with murder, senior judge Tan Sri Hashim Yeop Sani was brought in from the Federal Court to hear the case in the High Court.

Similarly, Shafee said senior judge Datuk (then Tan Sri) Augustine Paul was brought in to preside in the former deputy prime minister Datuk Seri Anwar Ibrahim's abuse of power case in 1998, and Datuk Arifin Jaka was brought in for the first sodomy trial.

The senior lawyer said prior to Justice Nazlan presiding in the SRC case, the judge was attached to the High Court commercial division.

Shafee pressed the need for an experienced criminal judge to preside over the case, saying that Justice Nazlan was not qualified.

Najib was found guilty of abuse of power with regard to approving the RM4 billion loans for SRC from Retirement Fund (Incorporated) (KWAP) between 2011 and 2012, and also three counts each of criminal breach of trust (CBT) and money laundering worth of RM42 million of SRC funds between Dec 26, 2013 and Feb 10, 2014.

For this, Justice Nazlan sentenced the former premier to 12 years in jail and fined him RM210 million last July 28.

Shafee, who appeared with Harvinderjit Singh, complained that what Justice Nazlan did as the trial judge was augmenting further what was previously not there when a prima facie case or defence was called on the former premier.

“The trial court should make a decision following the finding of facts. The trial court is barred from attempting to further supplement its findings at the end of the defence,” he said.

This is where, the senior lawyer said, a senior criminal judge would not fall into a mistake.

He used the example of Anwar's sodomy II trial presided over by Justice Datuk Mohamad Zabidin Mohd Diah (now a Court of Appeal judge), where the court found a prima facie case had been brought against the PKR leader and stuck to it.

“The trial judge in the sodomy II case found Mohd Saiful Bukhari Azlan to be a credible witness but decided to acquit Anwar following questions surrounding the exhibit which was opened by investigating officer Superintendent Jude Pereria.

“In our case, there were questions in the testimony of the 42nd prosecution witness, Datuk Suboh Md Yassin, who gave an inconsistent testimony to the prosecution, but the trial judge disregarded it altogether to go frolic and find a case against our client.

“We were shocked when we read the judgement for the first time. We managed to rebut the prima facie findings but also everything else, yet the court found the former premier guilty. This was totally out of line and totally against the criminal justice system,” he added.

Shafee said Justice Nazlan even went to the extent of which after calling Najib's defence on a set of matters decided in a prima facie case, he also found the former premier guilty of a different set of matters.

“That was akin to shifting the goal post on our client. You cannot use the defence stage to supplement or augment the prosecution's or the court's case. This is fundamental and the High Court had gone completely wrong,” he added.

Shafee said this is something an experienced criminal judge would not resort to.

The hearing of the appeal continues tomorrow before the three-member bench presided by Justice Datuk Abdul Karim Abdul Jalil. The other two judges are Justices Datuk Has Zanah Mehat and Justice Datuk Vazeer Alam Mydin Meera.

A total of 12 days are fixed to hear Najib's appeal against the conviction and sentence.