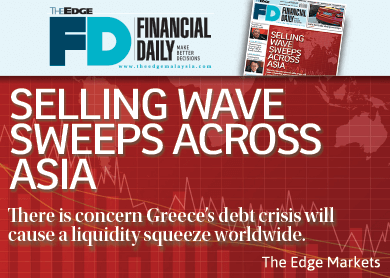 KUALA LUMPUR: The worsening Greek debt crisis is haunting the global financial markets again. Asian equity markets succumbed to strong selling yesterday, with China leading the fall. The breakdown of the negotiations between the Greek government and its creditors has left the country on the brink of default and pushed it closer to a possible exit from the eurozone, sending a shock wave across the globe, raising concerns that the debt crisis will cause a liquidity squeeze worldwide.

China’s Shenzhen Composite Index was the biggest loser in the Asia-Pacific region. The benchmark index plummeted 6.05% to 2,351.4 points, while the Shanghai Composite Index slid 3.34% to 4,053.03, despite a cut in the lending rate to a record low by the People’s Bank of China. (see chart)

Meanwhile, the ringgit hit a 10-year low of 3.7887 against the US dollar — the lowest since July 2005 — before it closed at 3.7843 against the greenback, down 0.4% yesterday. The local currency is the worst performing and has depreciated 7.6% against the US dollar, no thanks to persistent selling on the equity market.

According to MIDF Research, foreign investors have now been net sellers on Bursa for nine consecutive weeks, the longest stretch of foreign withdrawal since the last three months of 2013. Besides the external headwinds, fund managers and analysts commented that investment sentiment in Malaysia was also dragged down by its own domestic affairs, for instance the possible downgrade by Fitch Ratings.

“The Greek debt crisis or the pending US interest rate hike, for instance, are factors that have prompted investors to flee from the market. But more importantly on Bursa Malaysia, is that the valuations of most stocks are expensive. There’s hardly any reason to buy,” said a fund manager, who is sitting on a high cash level.

Regardless, he feels that the KLCI remains “well-supported” at about 1,660 points, with the possibility of an impending sovereign credit rating downgrade by Fitch factored into the forecast.

“How far the FBM KLCI is going to fall depends on whether or not there is panic selling in Malaysia,” said Datuk Nazri Khan, head of retail research at Affin Hwang Investment Bank Bhd, adding that the technology sector is expected to be worst hit.

“There will be a further correction in the market, and we can expect to see a 5% fall to around 1,600 points in about one month,” he said, adding that more price swings are to be expected due to Greece’s expected default on its debts.

Kenanga Research, in a note yesterday, said while the KLCI will see a rebound, it may be short-lived due to a lack of fresh catalysts.

“The lack of fresh catalysts will see local investors continue to stay on the sidelines while foreign funds appear to be still reducing their shareholdings of Malaysian companies, no thanks to the weak currency outlook, sovereign rating review, ongoing 1MDB saga, as well as relatively rich market valuation compared to its regional peers,” it said.

This article first appeared in The Edge Financial Daily, on June 30, 2015.