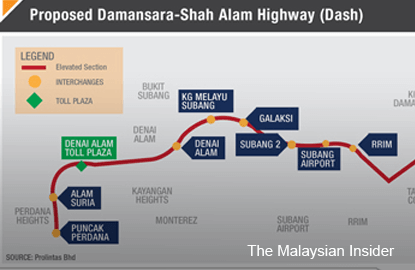 (June 29): The Selangor government has agreed to include the Damansara-Shah Alam (DASH) elevated expressway alignment into the Petaling Jaya City Plan 2 (RTPG 2).

Petaling Jaya Mayor Mohd Azizi Mohd Zain said that the inclusion of DASH was concluded at the Selangor state exco meeting on May 13.

“We suggested omitting the DASH project from the RTPG 2 during our full board meeting on April 24.

“However, the state government has agreed to include parts of the alignment that is not subject to any protest from residents,” he said after the monthly full board meeting this morning.

Azizi said that the state government has instructed the Malaysian Highway Authority (LLM) and Petaling Jaya City Council (MBPJ) to revisit the alignment and hold a public hearing to listen to the grouses of the residents who are affected by the project.

“Parts of the alignment where there were no written protests by residents will be included in the RTPJ2.

“We only received objections from the Damansara Perdana and Mutiara Damansara residents.

“We will be calling the residents for a public hearing between July 13 and Aug 4.

“We will listen to their grouses then present our feedback to the state government,” he said.

Azizi said that the issue was expected to be resolved by the end of the year.

“Once we have gathered the feedback then we will present our report to the Selangor State Planning Committee for approval,” he said.

Azizi said that there was nothing wrong in the Projek Lintasan Kota Holdings Sdn Bhd (Prolintas) announcement that it plans to start construction in March 2016.

“Prolintas can announce plans but we will still have to follow our process of engaging with the residents.

“The alignment is still not included in RTPJ2,” he said.

The Malaysian Insider had quoted Prolintas group chief executive Datuk Zainudin A. Kadir as saying that construction of the expressway was expected to start in March next year.

Zainudin had said at a buka puasa event that the company was waiting for the alignment to be included into the draft plan by the local authorities.

“Shah Alam City Council has included the alignment into its plan and we are now waiting for Petaling Jaya City Council (to do the same).

“Once it is, we can start construction,” he said.

The residents had been objecting to DASH since 2012 because it was too close to residential homes in their area, with some barely 30 metres away from the expressway.

It will then link users to the Lebuhraya Damansara Puchong (LDP) and Sprint highways.