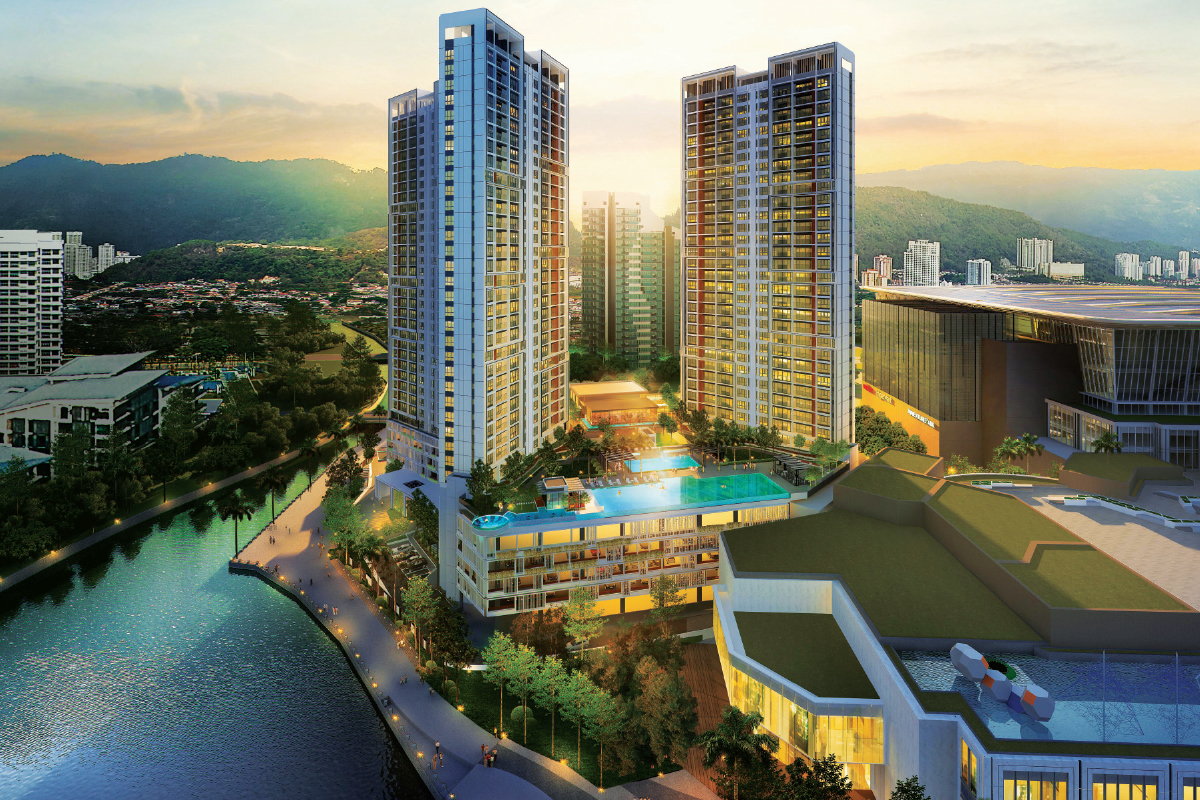 An artist’s impression of Mezzo, the first residential project in The Light City (Photo by IJM Land)

The Light City development at the heart of The Light Waterfront Penang will see the unveiling of its first residential component, Mezzo, in the second quarter. Developed by IJM Perennial

Development Sdn Bhd, a joint venture between IJM Corp Bhd and Perennial Real Estate Holdings Ltd, the 4.12-acre, freehold Mezzo is a luxury seafront condominium offering 456 units in two 34-storey towers. Units will have built-ups of 1,033 sq ft to 1,367 sq ft and prices start from RM900,000. The project, which has a gross development value of RM512 million, is slated to be completed by 2025.

According to IJM Land Bhd managing director Datuk Edward Chong, the condominiums are optimally oriented to facilitate natural ventilation as well as maximise the scenic views of the Penang Straits. “It is also a low-density development with just four units per floor. Each unit comes with a locker room at the car park level that provides practical space for storage,” he says via email.

“Future residents will appreciate Mezzo’s accessibility,” Chong adds. Residents will get to enjoy convenient access to The Light City’s other components — such as a retail mall, Penang Waterfront Convention Centre, hotels and office suites — as well as a wide range of amenities as it is located a few minutes’ drive from both George Town and the mainland.

Situated on the eastern coast of Penang Island, the site is served by the Tun Dr Lim Chong Eu Expressway and is near the Penang Bridge, Penang International Airport, Bayan Lepas Free Industrial Zone and a ferry terminal, Chong adds. The monthly maintenance fee is estimated at 30 sen psf, inclusive of sinking fund.

“We are confident that Mezzo will be well received as it resonates with today’s lifestyle [demands] and owing to its strategic location and [position] as stable investment assets. The homes are designed to give resort-like vibes with uninterrupted views of the sea and offer an exclusive lifestyle and privacy with just four units per floor,” says Chong. He notes that Mezzo caters to both local and foreign buyers.

“As the entire project develops, we believe values will rise,” he adds.

The 32.76-acre The Light City is part of Phase 2 of the RM6.5 billion The Light Waterfront Penang. It accounts for 22% of the 152-acre masterplan development.

Phase 1 comprises 42 acres of residential development in which a total of 1,177 units of high-end residential units have been completed, whereas Phase 2 is a 103-acre mixed-use development. Phase 3 is the 7-acre Seafront Park. An artist’s impression of the pool (Photo by IJM Land)

The developer also plans to launch 2-storey terraced homes in Bandar Rimbayu as well as in Austin Duta, Johor, in 3Q2021.