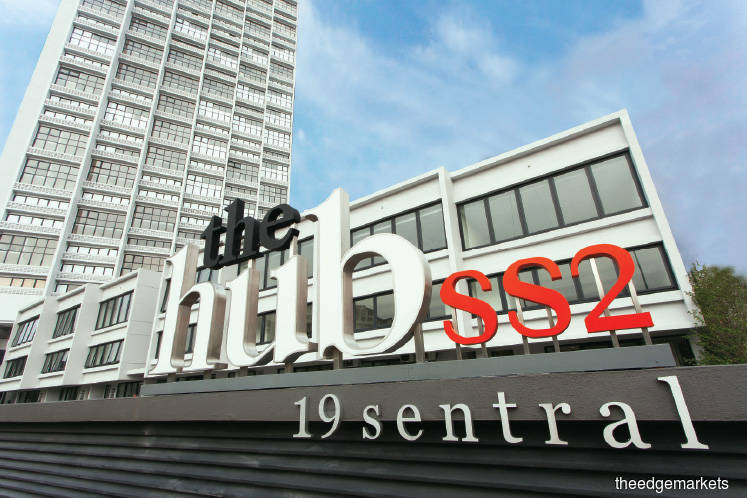 Launched in June 2013, The Hub is a 2.51-acre freehold mixed-use commercial development with a gross development value of RM333.21 million. The development, which comprises 13 low-rise 4-storey shop-offices and 276 signature suites or small office versatile office (SoVo) units in a 44-storey tower, was completed in March this year.

“We have rented out 80% of retail units, and half of the tenants will be starting their operations by December, and the rest by early next year,” said SDB head of post development Peter Quah in a recent press statement. The retail units, offering built-ups of 5,285 to 6,157 sq ft, are leased and managed by SDB.

The Hub also offers public spaces such as a promenade, sheltered courtyards, signature water features and open-air plazas. The landscaping at the development aims to create a nurturing and inspiring environment for people to work in, such as the landscaped gardens and the reflective pool with specially designed artwork stools. The rooftop of The Hub, which offers views of the PJ and KL skyline, also features a double-volume gym with a swimming pool and Jacuzzi.

“Selangor Dredging has made its mark in the vicinity of SS2 with Ameera and Five Stones and now, The Hub SS2 is the tallest building in the area. These developments have brought about a booming and bustling growth in the vicinity to create one of the most established commercial hubs in Petaling Jaya,” said Quah.

“Also, SS2 is one of the largest districts in Petaling Jaya with neighbouring places like Damansara Jaya, Damansara Utama, SS17 and SS23 (Taman Sea),” he added. To further enhance the connections between its developments, the developer will build a link bridge connecting The Hub SS2 to Five Stones, according to the press statement.

Around 400 guests turned up for the Hub Fiesta, the majority of whom were residents of Five Stones and Ameera, while others were from the vicinity. Besides free-flowing popcorn and door gifts for the first 500 guests who registered for the event, the event also treated guests to food trucks, games, face painting, clown shows, a cooking demonstration, a year-end sale by Buffalo as well as Zumba and line dancing classes.