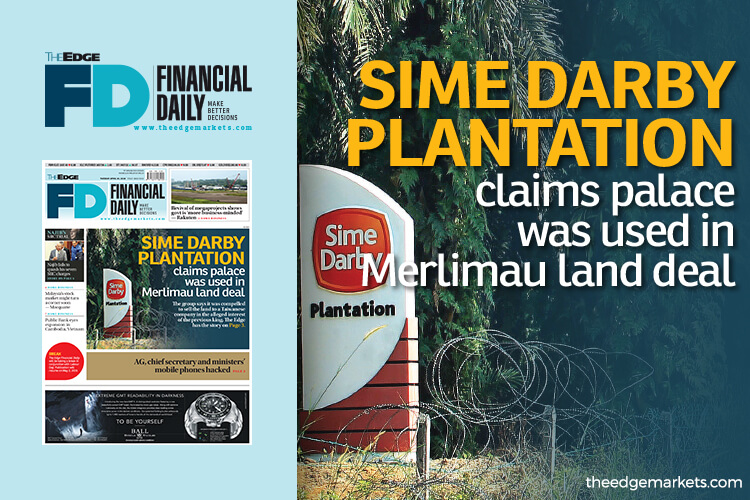 KUALA LUMPUR: Sime Darby Plantation Bhd (SDP) has filed a judicial review application to stop the compulsory acquisition of its 75ha land in Merlimau, Melaka, by a Taiwan-controlled company that claimed it was acting in the interest of the former Yang di-Pertuan Agong, Sultan Muhammad V, to compel it to sell the land at a below market value price of RM35.282 million.

Besides the Taiwan-controlled firm GI A Resources Sdn Bhd, SDP, which is majority owned by the Employees Provident Fund and Permodalan Nasional Bhd, also named the Melaka government, the state land and mines department, and the Jasin District Land Office, as respondents in the application.

In the application sighted by The Edge Financial Daily, SDP claimed it had written to Melaka Chief Minister Adly Zahari several times — specifically on Oct 29, Nov 13, and March 25 this year — to appeal against the state-compelled acquisition. But there has been no reply from Adly’s office.

Hence, SDP said it was forced to file the application to the Melaka High Court yesterday, in the hope of gaining leave (permission) for the full merits of its application to be heard, with the aim of quashing the acquisition.

GI A Resources is a company incorporated in Malaysia, but is 70%-owned by Xinzhongwei Capital Holdings Sdn Bhd, which is in turn 98%-controlled by Taiwan.

An affidavit by SDP head of land management unit Mohd Razlan Mohd Rahim has been submitted in support of the legal challenge.

In the affidavit, Mohd Razlan said GI A Resources, which had claimed to represent Sultan Muhammad V’s interests, failed to clearly state what is the purpose behind the acquisition, which he said is an anomaly under the Land Acquisition Act 1960.

According to Mohd Razlan, GI A Resources only said the land would be used for a proposed “Bandar Pendidikan Bestari” mixed development.

“The Jasin District Land Office had, on March 27, 2019, granted an oral award of RM35.282 million [for this compulsory acquisition] but this value does not represent the market value of the said land,” he said, adding that the land also has historic value, as it has a 66-year-old colonial bungalow erected on it that is used for estate management purposes.

Mohd Razlan also claimed GI A Resources had provided a letter dated Dec 12 last year to SDP in support of the acquisition by claiming that the deal was discussed at a meeting with the Yayasan Sultan Muhammad Ke-5, and that the king then had wanted the said land.

Prior to that, GI A Resources, he claimed, had furnished a letter dated April 4 last year to the Melaka government, purportedly bearing the Istana Negara’s letterhead that was signed by the Royal Comptroller Datuk Pengelola Bijaya Diraja, in support of the acquisition.

If the documents are true, then there has been a violation of Article 74 of the Federal Constitution, as Istana Negara, a federal institution, has been used to interfere in state affairs, namely the compulsory land acquisition, Mohd Razlan said.

This will also mean that the Jasin District Land Office’s move to issue a letter dated March 19 this year to acquire the land is ultra vires, as the palace cannot direct the state government to take an action that is wrong and against public interest, said Mohd Razlan.

The deal also violates Article 13 of the Federal Constitution, Mohd Razlan added, which deals with the right to owning property in the country and that no person shall be deprived of a property save in accordance with the law, and that no law shall provide for the compulsory acquisition or use of a property without adequate compensation.

Moreover, this transaction involves compulsorily acquiring a government-linked company’s asset for the interest of a foreign-owned company, he added.

He said SDP had, in the past, relented to the compulsory acquisitions of various plots of its land to build hospitals, schools, mosques and part of highways.

This particular land deal, however, was not rational, he said, adding there were procedural improprieties and illegalities involved, including the abuse of discretionary power.

Besides quashing the compulsory acquisition, which was gazetted by the state government last September, SDP is also seeking damages to be assessed by the court and a declaration, among others, that the Land Acquisition Act 1960 cannot be abused to acquire SDP’s land to benefit GI A Resources.