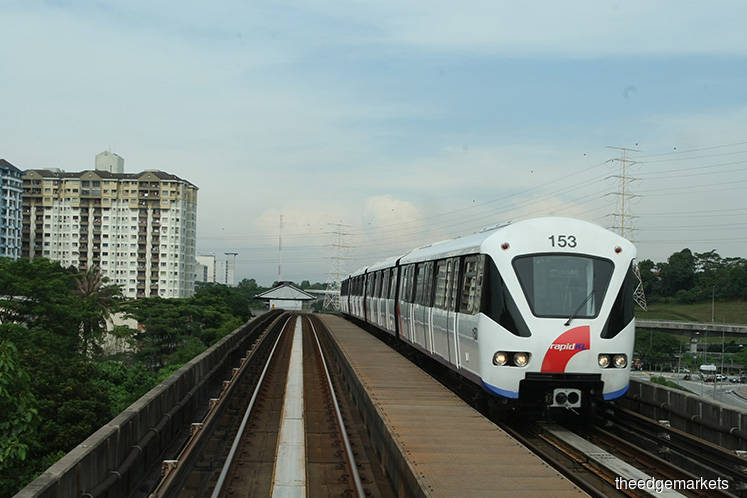 KUALA LUMPUR: Analysts reckon the third light rail transit (LRT3) line in the Klang Valley is not in danger of being dropped despite talk of Putrajaya reviewing the project because of massive cost overruns.

In the worst case, the LRT3 could be shelved, CIMB Equities Research said, believing “this is unlikely to materialise as the project has entered the intensive civil works phase”.

A local English-language daily reported yesterday the cost to build the 37km line between Bandar Utama and Klang has jumped to RM15 billion, from the initial estimate of RM9 billion in 2015.

As a result, the government is reviewing the project and is expected to make a decision soon, the daily quoted a source as saying.

The report said the government, through Prasarana Malaysia Bhd, could take over the construction of the project from the project delivery partner (PDP) — a 50:50 joint venture between Malaysian Resources Corp Bhd (MRCB) and George Kent (Malaysia) Bhd.

Given the financial constraints and a national debt of RM1.087 trillion as at end-2017, analysts are also not discounting the possibility that the government may defer the project.

If Prasarana assumes control of the LRT3 construction, analysts said the government would do away with the PDP model and revert to the turnkey model to reduce construction cost, which may involve reducing the project’s size and scale.

“This news is a negative surprise as downsizing the LRT3 will impact existing order books and margins,” CIMB analysts Sharizan Rosely and Kamarul Anwar said in a note to clients yesterday.

UOB Kay Hian Securities (M) Sdn Bhd, in a separate note to clients, said there is no indication as yet that the government will take over the construction job.

“At this stage, we believe the PDPs and Prasarana are in discussions to address this matter and there are no signs that Prasarana will take over the project from the PDPs to date,” said UOB Kay Hian. When contacted, Prasarana, MRCB and George Kent declined to comment.

To complete the LRT3 project, analysts said Prasarana may need to raise new funds and seek an fresh approvals from the new federal cabinet.

“Prasarana may seek an additional budget from the government as the consortium currently has the approval to raise up to RM10 billion. To raise additional funds, the company may need the cabinet’s approval,” said UOB Kay Hian.

Since assuming power following the 14th general election on May 9, the Pakatan Harapan government has been reviewing mega-infrastructure projects such as the RM81 billion East Coast Rail Link, at risk of being scrapped.

According to analysts, the LRT3 cost has exceeded the RM10 billion budget due to design changes affecting the proposed 26 stations along the rail stretch.

CIMB estimated the cost of some of the 26 stations was inflated from RM80 million to RM200 million each to accommodate state-of-the-art facilities to cater for larger capacities.

Prasarana, in September 2015, awarded MRCB and George Kent as PDPs to build the LRT3. The construction work began in the second quarter of 2017, with the service expected to commence on Aug 31, 2020.

Under the PDP model, MRCB and George Kent are responsible for the design and construction of the LRT3, in addition to assuming the risks of cost overruns or delays.

The LRT3, launched under the previous Barisan Nasional government, was originally estimated to cost RM10 billion. Of this, RM9 billion was for the construction of the overall rail network, and the remaining RM1 billion set aside for land acquisition.

In a November 2015 parliamentary reply, former prime minister Datuk Seri Najib Razak — in his capacity as the then finance minister — said the cost of the LRT was fixed at a maximum RM9 billion and the PDPs will receive a fee equivalent to 6% of the final project cost.

At the escalated RM15 billion cost, analysts have estimated that MRCB and George Kent will enjoy a PDP fee that could amount to RM900 million.