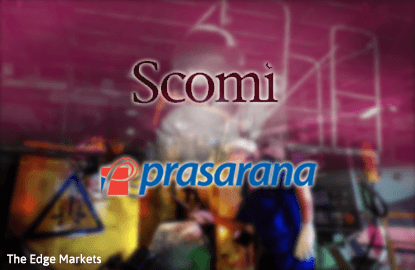 In a filing with Bursa Malaysia, Scomi said its wholly-owned subsidiary, Scomi Transit Projects Sdn Bhd (STP), has today served the claims on Prasarana, owner of the KL Monorail System, pursuant to Section 5 of the Construction Industry Payment and Adjudication Act 2012 (CIPAA).

Scomi said in the event of Prasarana disputing its claims, STP will refer the claims to adjudication under the CIPAA.

“STP intends to fully enforce its rights under the contract in respect of the notice, including taking all necessary legal actions acting on the advice of its solicitors,” it said.

“The board wishes to inform that the effect of the notice on the on-going business performance of the company, is dependent on the outcome,” it added.

Scomi said the notice was issued, despite continuous on-going negotiations with Prasarana on the matter.

Based on the principal contract, Scomi was contracted by Prasarana to deliver 12 sets of new four-car monorail trains, construct a new depot, install a new signaling system and upgrade the KL Monorail stations, including the electrical and mechanical system, for a total of RM494 million.

The second supplemental contract requires Scomi to deliver 10-sets of four-car trains, including seven sets for revenue service by Dec 31, 2015.

Prasarana, however, claims that to date, only six sets of new four-car monorail trains had been delivered — five sets of which are currently in revenue service.

Both parties are in dispute over the delay of the trains.

Prasarana had issued Scomi two notices on Jan 4 and Feb 18, related to termination of the contract following the delay, which Scomi argued were “defective”.

The contents of the notices were not disclosed by both parties.

Scomi had then obtained an ex-parte injunction against Prasarana, restraining the latter from wrongfully terminating the KL Monorail fleet expansion project’s principal contract and related contracts, due to the two notices.

Following this, Prasarana then issued a notice of remedy to Scomi dated March 8, which stated that Scomi has 60 days to submit any motivation plans to remedy the delay, failing which Prasarana would be at liberty to terminate the KL Monorail expansion principal contract.

Citing the injunction, Scomi said the injunction was later withdrawn when Prasarana gave an undertaking to court that they will not be relying on the said “defective” notices to terminate the contract.

Scomi said should STP succeed in the CIPAA payment claims, it will have a positive impact on the financial position of the company for the financial year ending March 31, 2017.