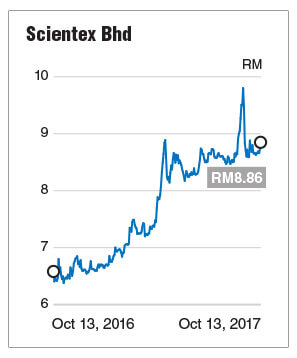 KUALA LUMPUR: Packaging manufacturer and property developer Scientex Bhd is cautiously optimistic about its prospects for the current financial year but still expects to see an improvement in both the bottom line and top line performances.

Managing director Lim Peng Jin said the better revenue and profits  would be driven by both the manufacturing and property businesses.

“For the manufacturing side, for the last three to four years, we have invested probably almost RM1 billion to expand the Group’s total production capacity of industrial and consumer packaging to 350,000 metric tonnes per year,” Lim told The Edge Financial Daily.

Scientex is one of the world’s largest producers of stretch film, a highly stretchable plastic film wrapped around items.

“For the property segment, we have acquired four pieces of new land recently. So, all these investments will contribute to growth for the next two years,” said Lim.

Elaborating on the manufacturing segment, Lim said export sales accounted for about 70% of the business in FY17 with the percentage expected to rise to 75% in the future.

He said the group’s new stretch film facility in Arizona in the US is on track to commence its operations early next year.

The two lines at the US facility, he said, will take about two years to be fully utilised. At full utilisation, the plant will be able to produce up to 30,000 tonnes of stretch film per annum.

With this new plant, Lim said the group expects its sales in the US market to increase further.

Locally, Scientex has allocated a capital expenditure sum of RM60 million in FY18 for the upgrade of its existing machinery and warehouse, which will be funded by internally-generated funds.

As for the property segment, Lim said sales are very encouraging with the group’s projects enjoying a take-up rate of 70% to 80% in the first six months of launch.

“Most of the projects will be completely sold out by the time the project is completed,” he said, adding that Scientex has a very minimal inventory balance.

For FY18, Scientex is targeting to launch about RM800 million worth of new developments, including three projects in Johor, Melaka and Ipoh, Perak.

In August, the group announced its maiden project in the Klang Valley property market. Lim said the project in Rawang will be launched in FY19.

Scientex now has a total land bank with a gross development value (GDV) of RM11 billion, which includes completed projects with a RM3.2 billion GDV and ongoing projects worth RM1.5 billion. The remaining RM6.3 billion worth of land will be used for future projects which can last the group for up to 10 years, said Lim.

An analyst from a local research house said she is looking at a mid-single-digit earnings growth for Scientex in FY18.

“Earnings-wise, we are expecting strong growth to start kicking in in FY19,” she said, adding that Scientex will see contributions from the US plant in the second half of FY19.

The analyst said consumer packaging will still see a higher demand, but noted there is a slowdown in demand for stretch film products.

TA Securities analyst Damia Othman believes that Scientex will see a sustainable double-digit profit growth for FY18, driven by the group’s expansion in the manufacturing capacity as well as an additional RM7 billion GDV of undeveloped land bank.

“Looking at past projects, the company has a good take-up rate,” said Damia.

However, Damia is of the view that the group will only see a single-digit growth in FY19.