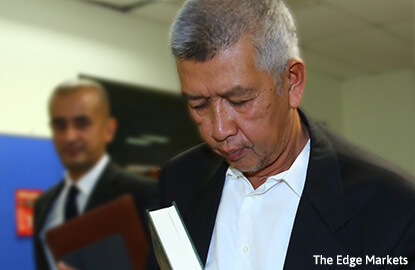 Ishak has claimed trial for the three charges.

All three charges, upon conviction, carry a minimum fine of RM1 million and an imprisonment of not more than 10 years.

The Sessions Court Judge Mat Ghani Abdullah fixed bail at RM600,000 with one surety, and Ishak was not required to surrender his passport.

Ishak was charged for making a misleading statement in a material particular between June 4 and 5, 2010, which was published in The Star on June 5.

The news report had quoted him on the reason he bought shares in Kenmark, in which he said, "It is a good company. I checked and there is nothing wrong with the company. There is a misunderstanding."

Ishak also faced two insider trading charges for the disposal of 27.69 million shares held by Unioncity Enterprices Ltd on June 9 and the disposal of 31 million shares held by BHLB Trustee Bhd for a discretionary trust for the family of Ishak on June 11 while in possession of information that was not generally available, a reasonable person would expect it to have a material effect on the price or value of the said share.

Such information being that two of its clients had gone bankrupt and EON Bank Bhd did not agree to uplift the receivership of Kenmark as at June 8, 2010.

Ishak is currently involved in oil palm in Indonesia, hotels in South Africa and Cambodia, and the aviation business. He is one of the directors in Amrul Nizar Anuar Resources Sdn Bhd, which solely owns Raya Airways.

Ishak was a prominent corporate figure in the 1990s. He was involved with the fight for KFC Holdings (M) Bhd and controlled the fast food operator and Idris Hydraulics (M) Bhd, among others.

Ishak and his family emerged as the largest shareholder of Kenmark on June 10, 2010 after they acquired 32.26% shares in the company.

He bought the shares on June 1 and 2, 2010 after investors dumped the group's share following the disappearance of its managing director and largest shareholder James Hwang.

The acquisition gave a paper gain of RM10 million to Ishak after he sold the shares. However, the SC has filed an injunction to prevent him from utilising the gains he received from the sale, as it suspected there is breach of securities law. The case is ongoing.

Kenmark, which was manufacturing computer workstation, has ceased operation and fell into Practice Note 17 status.