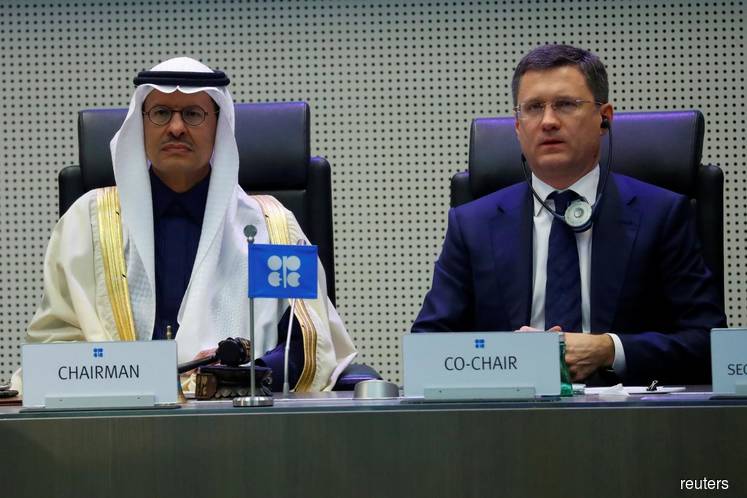 DUBAI/LONDON (Dec 18): Saudi Arabia turned to its Gulf ally the United Arab Emirates when it needed help convincing Russia to sign on to deeper oil supply cuts at this month's OPEC meeting.

The UAE's de-facto ruler, Sheikh Mohammed bin Zayed, hosted crucial talks between Saudi Arabia and Russia in Abu Dhabi, where the three nations ironed out what would become one of the deepest supply cuts in a decade, four sources familiar with the negotiations told Reuters.

Details of the negotiations ahead of the official announcement of cuts by OPEC and non-OPEC producers on Dec 6 have not been previously reported.

The UAE’s role in the talks marks a change from years past and highlights Russia's rising clout in the region. Since Russia started cooperating with OPEC on supply agreements in 2016, Riyadh and Moscow have led oil supply decisions in advance of OPEC meetings without much involvement from other producers. This time, Riyadh wanted Abu Dhabi to help add pressure on Moscow to agree to the cuts, two sources said.

Russia saw the agreement as a way to strengthen key relationships in the region.

"The message Russia wanted to send is that it is supporting Saudi Arabia at a crucial moment and that the alliance is solid,” one of the sources said. "The UAE's role shouldn't come as a surprise. Russia has very strong ties with the UAE."

Russia and Saudi Arabia are the world’s top exporters, together accounting for 20% of global production. The involvement of the UAE, which produces 3% of global oil supply, came after Moscow signaled opposition to extending new supply cuts in advance of the OPEC meetings in Vienna on Dec 5 and 6, three of the sources said.

Russia's Direct Investment Fund and the Russian energy ministry, which play key roles in the OPEC talks, declined to comment. Media offices for the Saudi Arabia and UAE governments did not respond to a request for comment.

Saudi Arabia's Energy Minister Prince Abdulaziz bin Salman orchestrated the deeper oil cuts and had been discussing them with Russian officials since October, when Russian President Vladimir Putin visited Riyadh, according to three of the sources. Since then, Saudi and Russian officials have shuttled between Riyadh, Moscow and Abu Dhabi to negotiate the oil-supply deal, the sources said.

The Saudis briefed Sheikh Mohammed that day on the proposal for deeper cuts, sharing the details of the reductions which would be distributed mainly among Saudi Arabia, Russia, the UAE, Kuwait and Iraq, two of the sources said.

On Dec 1, the Saudi leader MbS and his brother, energy minister Prince Abdulaziz, met Russia's Kirill Dmitriev — an influential Kremlin advisor and head of the government's US$10 billion sovereign wealth fund — on the sidelines of a Grand Prix Formula One race in Abu Dhabi, the UAE capital, the four sources told Reuters. Dmitriev flew to Riyadh the following day to tell MbS and Prince Abdulaziz that Moscow was on board with the cuts, one of the sources said.

Saudi Arabia needed production cuts to support higher oil prices ahead of the initial public offering (IPO) of shares in its state-owned oil firm, Saudi Aramco, one of the four sources said. In addition, Saudi Arabia needs a price higher than US$80 per barrel to balance its budget, according to the International Monetary Fund. Moscow needs only a price of US$42, according to 2019 budget figures and the Russian finance ministry.

The UAE is a close ally of Saudi Arabia and also had a stake in the IPO going well. The nation's Abu Dhabi Investment Authority is investing more than US$1 billion in the Aramco IPO after Riyadh reached out to its allies to support the offering, Reuters reported in November.

Russia had ample reason to resist cuts. Many Russian oil firms have long opposed scaling back production because they fear losing market share to the growing output from the United States, which does not cooperate with OPEC. Pressure on the Russian government mounted in recent weeks as firms including state-owned giant Rosneft and private major Lukoil publicly said that previous production curbs had already delayed new oilfield start-ups for too long.

Putin signaled his hesitance to make deeper cuts on Nov. 14 when he said that it was "an open secret" that Saudi Arabia has taken a "tough stance" on output reductions because of the IPO.

In the days before the Vienna meeting, OPEC delegates worried that Moscow might exit the agreement and raise its output before mid-2020, several OPEC sources said.

Global oil prices would likely have fallen without Russia's participation, according to OPEC sources and estimates by analysts such as Energy Aspects. Russia has been key to global oil supply cuts by OPEC and non-OPEC producers allied with Moscow, together known as OPEC+. The latest cuts had supported oil prices near US$65 per barrell.

Moscow has accrued power in the Middle East since 2015 by sending troops to Syria, where Russia and Iran have been key backers of President Bashar al-Assad in a civil war — while Saudi Arabia sided with Syrian rebels and the United States pulled back from the conflict.

Russia has managed to strengthen ties with both Iran and Saudi Arabia, which are locked in a decades-old contest for influence that raised worries of an open conflict after a recent spate of attacks on Saudi oil assets. Riyadh and Washington blame Tehran for the attacks. Iran denies any involvement.

Dmitriev had helped negotiate the initial Russia-Saudi deal in 2016, along with Russia’s energy minister Novak.

The latest OPEC+ agreement was a compromise. Russia agreed to deepen oilcuts but only for the next three months. Saudi Arabia agreed to make the biggest new supply cut.

Saudi and Russian officials kept important details of the deal they ironed out in Abu Dhabi under wraps until the day of the meeting to deliver a surprise to the market, which had expected an agreement to merely extend the current production pact. Brent oil rose 2% to more than US$64 a barrel on the news.

The OPEC+ pact calls for a new supply cut of 500,000 barrels per day (bpd), on top of the previous reductions of 1.2 million bpd. In addition, Saudi Arabia agreed to voluntarily hold its output to 400,000 beneath its quota, bringing the total effective cuts to 2.1 million bpd, or about 2% of global supply. OPEC+ nations produce more than 40% of global oil.

For Russia, the trade off of lower production for three months was worth the political capital it gains by showing support to Riyadh and Abu Dhabi, one of the sources said.

"All in all, it made this alliance of three stronger," one of the sources said.