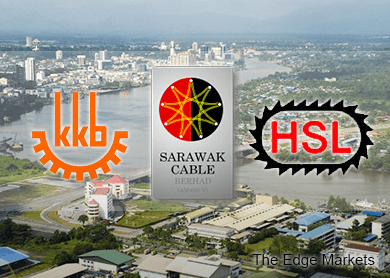 KUALA LUMPUR (June 18): Speculation that a snap election for Sarawak will be held by the fourth quarter of 2015 has directed the spotlight on Sarawak Cable Bhd, Hock Seng Lee Bhd (HSL) and KKB Engineering Bhd.

AmResearch Sdn Bhd analyst Thomas Soon said these companies were deemed beneficiaries under a round of election-themed trading in the run up to the polls.

"While doubt may then arise over the sustainability of any share price increases in the lead up to the state polls – in view the overall poor market sentiment – we believe Sarawak Cable, HSL, and KKB are adequately supported by fundamental and growth prospects, and are currently trading at undemanding valuations.

"Reiterate BUY for the three stocks," Soon wrote in a note today.

Sarawak Cable is put in good stead to secure jobs from construction of dams, thanks to its position as the leading domestic integrated electricity transmission player.

Meanwhile, HSL is said to be a strong contender for work packages of the Pan Borneo Highway, given its expertise in land reclamation jobs.

“HSL is also tipped to secure the second phase of the Kuching central sewerage system, which will be worth at least ~RM500 million. It had in 1Q15 completed the first phase, which was worth RM452 million,” Soon said.

KKB will benefit from government expenditure in rural development. Soon said this would involve steel pipe supply for water projects there.

But analysts have also noted KKB's oil and gas (O&G) related ventures, which are deemed crucial earnings growth factors for the company.