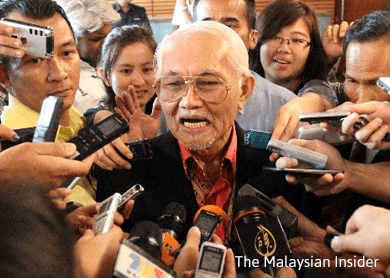 The Bruno Manser Fund said a London law firm had been commissioned by the controversial Taib to stop a BBC interview on Lukas Straumann's book, “Money Logging: On the Trail of the Asian Timber Mafia”, which exposes the former chief minister's vast wealth allegedly derived from illegal logging.

"During an interview with the BBC's World Service this afternoon, author and BMF executive director Straumann was shown a 'strictly private and confidential' letter by Mishcon to the BBC.

"In the letter, Taib's lawyers asked the BBC not to cover the book on Taib's environmental crimes in their broadcasts," BMF said in a statement today.

However, Mishcon's request was not backed by evidence on why the interview with Straumann should not be broadcast, apart from the book being "full of errors".

In a separate development, Mishcon did not to reply to a letter by Straumann in which he had asked for an explanation for Taib's extreme wealth.

Last week, Straumann challenged Taib to explain the source of his wealth and set a January 13 deadline for his lawyers to reply.

Straumann also invited Taib to make a public statement on the sources of his wealth on the occasion of the London book launch, to be held on January 16.

Taib, through his lawyers, had also attempted to stop the book from being published.

However, despite the legal threats, Swiss publisher Bergli Books and Amazon decided to publish and distribute the book globally.

The book has since been reviewed by National Geographic, The Huffington Post, The Ecologist, Malaysiakini and a number of other media.

"Money Logging: On the Trail of the Asian Timber Mafia" contains details of how Taib, who was Sarawak's chief minister for 33 years until he stepped down last year, allegedly amassed profits of up to US$15 billion (RM53.51 billion) with the complicity of global financial institutions.

BMF in a statement said Straumann's book told the story of those "who lost their ancient paradise to a ‘wasteland of oil palm plantation, pollution and corruption’ – and how they hope to get it back".

It said the book would rock "Malaysia's corridors of power" as it investigates what former British prime minister Gordon Brown has called "probably the biggest environmental crime of our times", in relation to the massive destruction of the Borneo rainforest by Malaysian loggers.

Brown's sister-in-law, Clare Rewcastle Brown, manages the Sarawak Report blog which actively campaigns against the state's deforestation and has in the past documented Taib and his family’s alleged extraordinary wealth.

Straumann had approached those who lost their homes in the forests and "criminals" who earned billions through illegal timber sales and corruption.

BMF had earlier estimated Taib's worth at US$15 billion, and said 20 of his family members had a collective wealth of US$21 billion.

In February this year, BMF lodged a police report against Taib's family for laundering timber corruption proceeds in Canada.

It said the report with the Canadian police was based on "new evidence" which apparently proves a financial link between Richfold Investments Ltd in Hong Kong and Sakto Development Corporation in Ottawa, Canada.

Six months ago, several local NGOs and opposition parties ran an unsuccessful campaign against Taib's appointment as the Yang di-Pertua, pointing out corruption allegations against him.