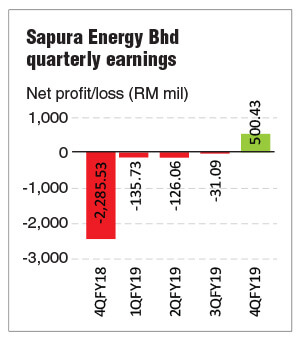 The disposal gain of RM2.66 billion, however, helped to offset the impairment of RM1.5 billion, according to its filing with Bursa Malaysia.

Consequently, Sapura Energy posted a quarterly net profit of RM500.43 million compared to a net loss of RM2.29 billion a year ago.

The divestment gain came from selling a 50% stake in its exploration and production (E&P) business, through a strategic partnership with OMV Aktiengesellschaft in November last year.

At the operation level, the group’s loss before taxation and impairment from operation swelled to RM677.46 million compared with RM177 million in the previous corresponding quarter.

A bright spot is the group’s quarterly revenue expanded 64.5% to RM1.49 billion in 4QFY19 from RM902.7 million in 4QFY18, on higher revenue from its E&C business segment.

The quarterly net profit has enabled the group to record a net profit of RM207.55 million compared to a net loss of RM2.5 billion in the previous year. The group has declared a special dividend of 0.5 sen per share for FY19, payable on June 24.

Its annual revenue fell 9.5% to RM4.57 billion from RM5.05 billion in FY18, primarily due to the lower revenue from the E&C and drilling business segments.

“This has enabled us to reduce our net gearing to a healthy 0.6 time and provided the financial flexibility for the group to bid for and execute higher value projects, in addition to gaining a strong partner in our E&P business. We are confident that our efforts in FY19 have paved a brighter future for the group,” he said.

On prospects, Sapura Energy said its current order book of RM17.2 billion is at its highest in two years.

The group is bidding for larger and higher-value projects globally, it said.

The value of cumulative new contract wins in FY19 stood at RM9.3 billion, with notable engineering, procurement, construction, installation and commissioning awards in its core markets, including the Pegaga gas development by Mubalada Petroleum, KG-DWN 98/2 NELP block by Oil and Natural Gas Corp Ltd and Hokchi Field Development in the Gulf of Mexico.