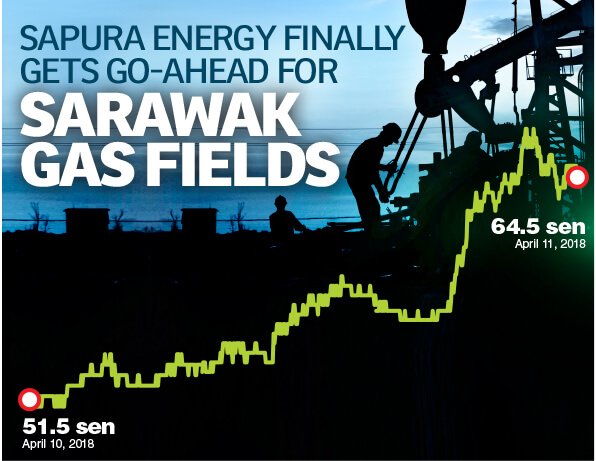 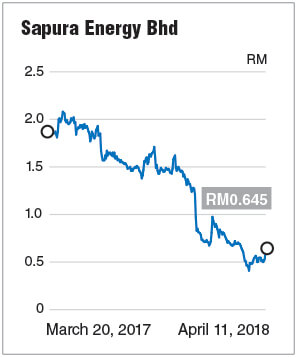 KUALA LUMPUR: The long-awaited go-ahead for the development of three gas fields off Sarawak provided a huge boost to flagging Sapura Energy Bhd, with its market capitalisation boosted by more than half a billion ringgit as its share price rallied sharply yesterday.

Sapura Energy logged its largest single-day price gain since its listing six years ago to finish a fifth higher to 64.5 sen after it announced it was proceeding with the development of the Gorek, Larak and Bakong gas fields off Sarawak under phase one of the SK408 production sharing contract (PSC).

The PSC follows a final investment decision (FID) made after the fields development plan received Petroliam Nasional Bhd’s approval. Concurrently, the key terms of the gas sales agreement for the gas fields’ development have been agreed upon.

In a Bursa Malaysia filing yesterday, the integrated oil and gas services and solutions provider said it is proceeding with the project together with Petronas Carigali Sdn Bhd and Sarawak Shell Bhd.

“The fields under the SK408 gas field development project are part of the discoveries made by Sapura E&P in its 2014 drilling campaign,” it said, adding that the fields will be developed as three separate well-head platforms tied back to the existing Sarawak Shell-operated F6 processing facility.

“The SK408 gas fields will be Sapura E&P’s second major upstream gas development project in East Malaysia, after the successful development of and commencement of production at the SK310 B15 gas field,” it added.

“With the recent extensive addition to our exploration acreage in Mexico and New Zealand, the group has been able to geographically diversify our E&P segment and put in place a well-balanced portfolio across exploration, development and production phases.”

Shell Malaysia chairman Datuk Iain Lo added: “Taking [a] FID on the fields reaffirms Shell’s continued commitment to developing the Sarawak basin and securing a clean energy source for Malaysia’s future. With this, there have been 12 important gas discoveries in Sarawak by Shell and its equity partners over the past five years.”

Sapura Energy opened the morning session at 55 sen but following the announcement surged 25.23% or 13.5 sen to a peak of 67 sen, before retracing to end the day at 64.5 sen, and enlarging its market capitalisation to RM3.86 billion.

Notwithstanding Sapura Energy’s impressive leap, its year-to-date performance remains negative, down 9.18% especially as it hit a historical low of 41 sen last month amid market volatility.