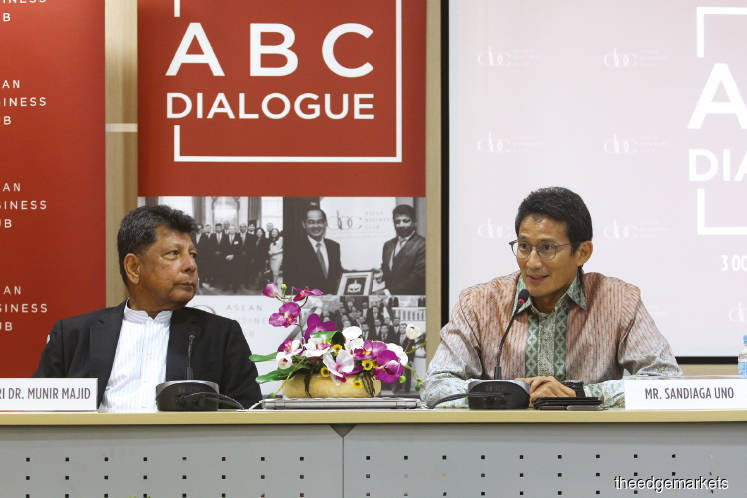 Gojek’s payment solution, for example, which has been spun off from its e-hailing platform, is on its way to becoming a unicorn investment or bigger, he said at a dialogue with business leaders last Thursday.

“Imagine if you could create an Asean-wide ecosystem,” said Sandiaga, “you could have much lower prices with a 600 million plus market to be tapped through the digital medium.”

He was speaking on “Indonesia’s Political Economy Outlook in Asean” organised by the Asean Business Club (ABC).

Sandiaga said the digital economy offers the opportunity for Asean businesses to collaborate on ventures for mutual benefit.

“In tourism, for example, why not combine instead of compete for visitors,” he suggested, noting that Asean tourist spots if marketed as a package could draw more tourists than each member state separately.

“Millennials love to travel,” said Sandiaga. “During the weekends, they prefer to spend it elsewhere. They borrow to travel; they don’t care,” he said.

The creative economy, which accounts for 9% to 12% of the Indonesian economy, is another sector that is showing strong potential, he said.

Bottlenecks like the “green light, red light” system, which Indonesia’s customs clearance process employs, would be a “Jurassic problem” in the digital economy, Sandiaga said.

He was responding to a question posted by Goldtex Group chairman Datuk Ramesh Kodammal who pointed out that cargoes held up at Indonesia’s customs during the festive season would be undeliverable because the goods would not be accepted by the importer after the season.

Described as a rising star in Indonesian politics, Sandiaga, 49, who is in the top shelf of Indonesia’s rich list, has earned a reputation as a big spender in his country’s political arena.

In the presidential election race in April this year, Sandiaga was the running mate of former general Prabowo Subianto, who lost his challenge against President Joko Widodo in a contest that was closely watched not just in Indonesia, but abroad as well.

Sandiaga told Bloomberg that he had spent close to US$100 million — or about a third — of his private equity fortune on the election campaign.

Sandiaga’s quick rise in Indonesian politics came after a stellar career as the co-founder of private equity firm PT Saratoga Investama Sedaya Tbk, which he set up in 1997 following the Asian Financial Crisis. The fund is one of Indonesia’s largest private investment outfits, with the equivalent of about RM5.95 billion in assets.

When Anies Basdewan became the governor of Jakarta in 2017 after defeating Basuki Tjahaja Purnama, who is commonly known as Ahok, Sandiaga became lieutenant governor of the city.

A year later, Sandiaga resigned from the post to become the running mate of Prabowo. Since losing the election in April, Sandiaga has been on sabbatical.

Speaking on his engagement with Indonesian voters, Sandiaga said data analytics show that what people want is help with their daily economic struggles, good education for their kids and health services rather than divisive issues like religion.

Sandiaga has been recognised for conducting the most extensive public consultation exercise by an Indonesian leader as the running mate of Prabowo.

“I made 1,567 constituency visits from Papua to Aceh. No other politician has attempted to do this,” said Sandiaga.

A book on this journey across Indonesia is due to be released early next year.

“I believe in open dialogue. My rallies are never more than seven minutes of speeches, 13 minutes of Q&A and 10 minutes of selfies,” he said. “They love selfies,” said Sandiaga.

“Their first question is always about jobs or food prices. They never ask whether you are practicing your religious obligations devoutly,” said Sandiaga.

On the issue of Asean business integration, ABC president Tan Sri Dr Munir Majid noted that Indonesia was seen as having a bigger responsibility than other Asean member nations because of the size of its market.

However, as tariff barriers come down among Asean countries, non-tariff barriers are going up, sometimes higher than the tariffs, said Munir. In Malaysia, this was seen in the automotive industry, he said.

In the case of Indonesia, said Munir, the issue of halal labelling was seen as a non-tariff barrier, as certification by Malaysia’s Department of Islamic Development was accepted by other countries but not by its neighbour.

“We talk with a lot of SMEs (small and medium enterprises) in Malaysia. They have given up on the Indonesian market [because of such difficulties],” said Munir.

Sandiaga said that with increased trade, these problems could be overcome in the longer term, as trade would lead to more investments and that would help to change policies.