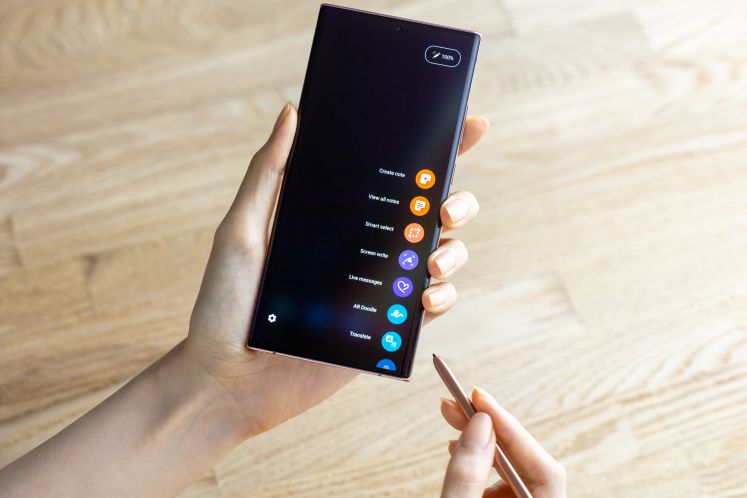 The star of the event is the all-new Samsung Galaxy Note20 and Note20 Ultra, which are optimised to allow users to work and play effectively wherever they are. The higher specification Note20 Ultra is expected to become one of the highlights of this year’s mobile gadgetry.

Almost all aspects of the Note20 Ultra are an improvement over its predecessor, the Note10+.

First, from a design point of view, the Note20 Ultra has higher screen-to-body ratio than the Note10+. This is achieved by further squeezing the top and bottom bezels. Samsung calls this the Infinity-O display.

Recall that the Note10+ was already leading the industry when it came out in the middle of last year with a screen-to-body ratio of 91.66%.

However, in terms of pixel density, the Note10+ is still higher – albeit barely – at 498ppi compared with the Note20 Ultra’s 496ppi. In comparison, the Note20’s pixel density is a more modest 393ppi.

What separates the Note20 Ultra’s display from the rest is that it comes with a 120Hz screen refresh rate, double the normal 60Hz refresh rate in most smartphone screens. The refresh rate refers to how many times per second the screen updates its buffer. A higher refresh rate is usually preferred by gamers because it makes the movement of the graphics more fluid.

In this case, a user can always optimize the energy usage by reducing the refresh rate to the normal 60Hz.

However, the most noticeable design change is at the back of the phone, as the camera bump is more pronounced on the Note20 Ultra than in the Note10+. This is understandable because the latest member of the Galaxy Note family has better quad cameras.

The Note20 Ultra is a huge improvement in terms of camera technology than the Note10+. Besides sporting a much higher megapixel resolution – 108MP in the main sensor compared with 16MP – the Note20 Ultra also comes with an advanced laser autofocus system.

Besides the 108MP wide angle camera (64MP on the Note20), the rear camera also comes with 12MP ultra-wide and telephoto sensors, which allows for up to five times Optical Zoom and up to 50 times Super Resolution Zoom with Optical Image Stabilisation.

The front camera of the Note20 Ultra is no slouch either. The 10MP front camera is able to capture sharp images that will allow you to up your selfie game. The image is so crisp that your followers on Instagram could be fooled that you were using the main rear camera.

Improvements are also made at the video function of the camera. Not only can the new Note record 8K videos, but audio input is also adjustable through three microphones – on the top, bottom and rear of the phone.

Samsung has also upgraded the air command function of the S Pen. The air command now can be used on the operating system itself, rather than just on selected apps in the previous Galaxy Note models.

This means you can take screenshots, go back a page, go back to home screen, select a certain part of the page to be shared with other users, and open the recent screens with just a twist of the S Pen on air.

For Malaysia and most other emerging markets, the Note20 will run on Exynos 990 Dual Octa Core processor, while for some other developed markets, the Qualcomm Snapdragon 865+ will be used.