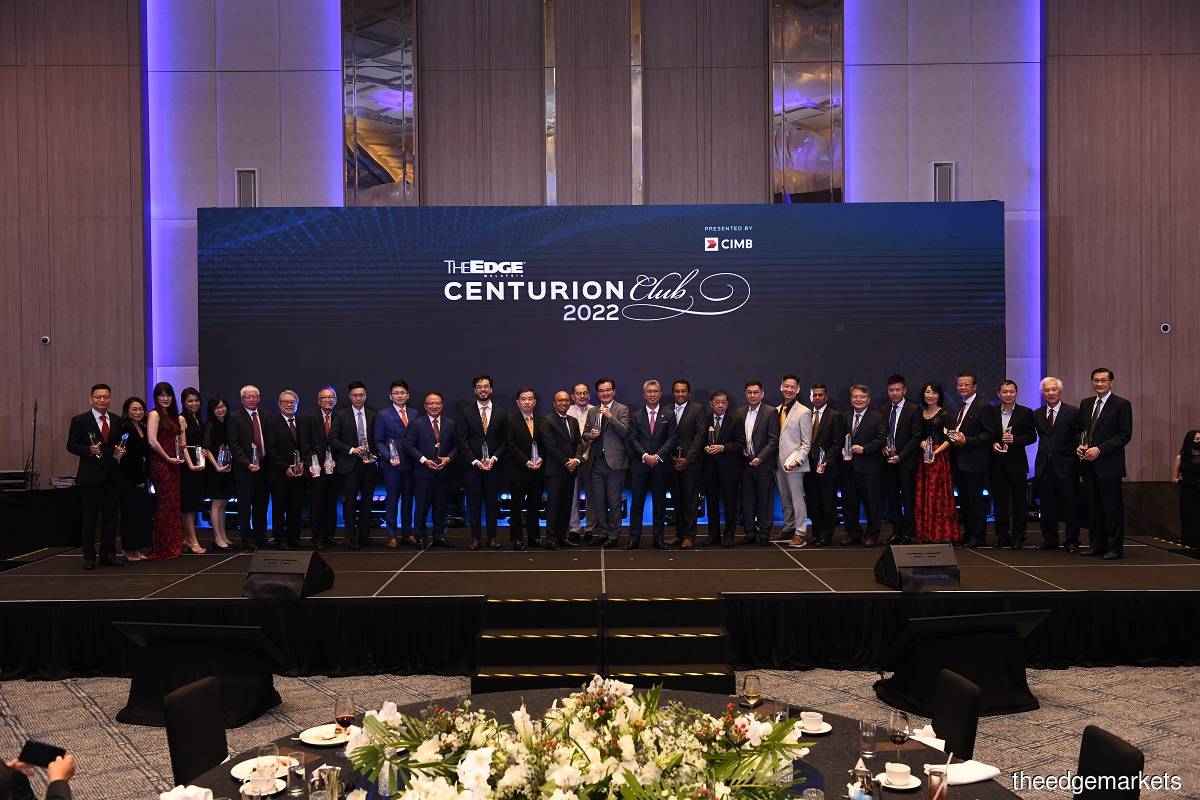 KUALA LUMPUR (Sept 19): Integrated chemicals and lubricants distributor Samchem Holdings Bhd was recognised by The Edge Malaysia Centurion Club Corporate Awards 2022 as the best overall performer among companies listed on Bursa Securities with a market capitalisation of less than RM1 billion, and named Centurion of the Year.

The event, which returned on Monday (Sept 19) night after a two-year hiatus following the Covid-19 pandemic, saw 29 of the country's best performing public-listed companies with a market cap of at least RM100 million but under RM1 billion being named winners of 36 awards at an exclusive gala dinner graced by the Minister of Finance Tengku Datuk Seri Zafrul Abdul Aziz.

The awards are the second one under The Edge’s banner to recognise the achievements of Corporate Malaysia. While the first — The Edge Billion Ringgit Club, which is in its 13th year now — celebrates companies with a market cap of at least RM1 billion, The Centurion Club Corporate Awards aim to uncover hidden gems and turn the spotlight on deserving smaller companies whose performance and potential match that of larger conglomerates.

“The awards are meant to also encourage companies to be more efficient, competitive and successful, so that they are able to grow sustainably and responsibly. While we surely do not want another pandemic like Covid-19, the devastating disruption to businesses has actually provided us with the chance to see which are the companies who were resilient in the face of one of the toughest periods in human history,” said Datuk Ho Kay Tat, The Edge Media Group publisher and CEO.

“These are the companies that were able to come out of the pandemic in good shape because they had solid foundations in both their business model and management capacity — helped no doubt also by the financial support and stimulus packages crafted by YB Senator and his team at MOF,” said Ho. In congratulating the winners, Tengku Zafrul likened them to “warriors” who have fought and triumphed over one of the most challenging operating environments. “Indeed, your achievements today are a solid testament to the country’s steady progress towards economic recovery,” he said.

“I’d (also) like to congratulate The Edge on The Edge Malaysia Centurion Club Corporate Awards, which (The Edge chairman) Tan Sri Datuk Tong (Kooi Ong) started. The award promotes meritocracy — recognising top companies that are members of The Edge Malaysia Centurion Club through key metrics that are transparent and based on merit. With the government’s enabling policies and awards such as these, I hope to see tonight’s winners in The Edge’s Billion Ringgit Club someday,” he said.

The awards this year also saw CIMB Group Holdings Bhd, who was a key presenter in the inaugural The Edge Malaysia Centurion Club Corporate Awards in 2019, returning as its main sponsor.

Datuk Abdul Rahman Ahmad, Group CEO of CIMB Group, said the banking group hopes that with CIMB’s support, The Edge Malaysia Centurion Club Corporate Awards will continue to play a role in inspiring the business community, while adding impetus to the overall economy.

Companies that qualify for inclusion in the Centurion Club must be listed on Bursa Malaysia as at end-March of the current calendar year, must not be suspended or be under Bursa’s watch list, and must not be delisted before the date of the awards. They must also have a market capitalisation of at least RM100 million but less than RM1 billion.

As of March 31 this year, there were 488 Centurion Club members — as opposed to 423 members in its inaugural year of 2019 — with an estimated collective market cap of RM160.9 billion.

Centurion of the Year

It also took home the Highest Growth in Profit After Tax (PAT) Over Three Years under the Industrial Products & Services sector. To be considered for these corporate awards, a member of The Edge Malaysia Centurion Club must be listed for at least four calendar years before the cut-off date of end-March of the current year. Those eligible to be recognised for highest ROE and PAT must also be profitable for every year during the evaluation period, which is 2018 to 2021.