SAM Engineering is ready to ‘rock’ 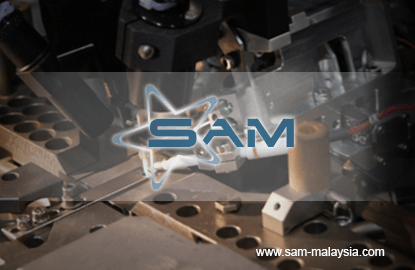 This article first appeared in The Edge Financial Daily, on April 18, 2016.

BAYAN LEPAS: In its rock-and-roll inspired annual report for the financial year ended March 31, 2015 (FY15), SAM Engineering & Equipment (M) Bhd told its shareholders that “we will rock to claim the RM1 billion record”. 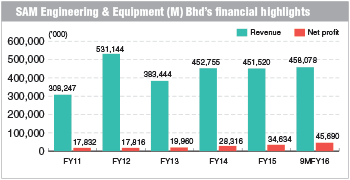 “Just like the bestselling rock music artistes, who have sold over one billion records worldwide and deserve their rightful place in the music industry, we are already on our way to rock past the RM1 billion revenue goal.

“With the aerospace business as anchor, we have strategically positioned ourselves to capture more long-term aerospace contracts,” stated SAM Engineering in the annual report.

Yes, the management is confident about the prospects of SAM Engineering, whose ultimate controlling shareholder is Temasek Holdings (Private) Ltd, owning an indirect stake of 67%.

“At present, our order book for the aerospace business exceeds RM3.5 billion, which is a comfortable number for us.

“The intention in the long term is to bring the revenue contribution from the aerospace business to 80% as this business provides the company with a steady stream of profit,” said SAM Engineering chief executive officer Jeffrey Goh Wee Keng.

He explained that the duration of a typical aviation contract ranges from five years to life of the aircraft programme, which can be 20 to 25 years.

“The huge order book will ensure steady growth for [our] aviation business in the next many years,” Goh told The Edge Financial Daily in an interview.

Goh said that the company was looking to change the ratio of 53:47 to 80:20, whereby the aerospace business would take up the majority stake.

The revenue generated from these casing products for 9MFY16 was about US$60 million, of which approximately 83% was contributed by the group’s Singapore plant.

Its steady revenue year-on-year from its aerospace business is probably the envy of man but its high-entry barrier restricts access to only a few. This may imply SAM Engineering’s rock-solid position in aerospace.

SAM Engineering’s profit has been on a steady growth path in the past five financial years. Its net profit nearly doubled from RM17.83 million in FY11 to RM34.6 million in FY15, while annual revenue grew from RM308.2 million to RM451.5 million.

The group is due to release its 4QFY16 and FY16 financial results soon. Its 9MFY16 revenue of RM458.08 million and 9MFY16 net profit of RM45.69 million have already surpassed its FY15 revenue and net profit.

In a period of one year, SAM Engineering’s share price more than doubled from RM2.79 on April 15 last year to RM6.11 last Friday, with a market capitalisation of RM527.43 million.

The company’s over RM3 billion order book, however, has caused happy problem — the plants are running at maximum capacity currently. Additional capacity is required.

To overcome this, SAM Engineering has set aside a capital expenditure of RM100 million, of which RM70 million will be allocated for the purchase of equipment and machinery to produce nacelle beams for the new Airbus A320neo aircraft.

The nacelle beams will be produced in a new plant to be leased in Bukit Minyak, Penang. In layman terms, the nacelle is a housing that holds engine, fuel or equipment on an aircraft.

The remainder RM30 million will be utilised for the production of prismatic parts that would take place in the group’s present facility in Bayan Lepas. These small-sized parts would be used in aircraft such as the Airbus 350, Boeing 787 and Bombardier C-Series Aircraft.

Goh said that the production for these two new products was expected to be launched this year, but significant contribution to revenue would be in one to two years down the road due to the long gestation period in the aviation industry.

“Both of these new products, the nacelle beams and prismatic parts production will bring the revenue contribution from the aerospace business nearer to the 80% goal, and will steer the group towards reaching the RM1 billion revenue target in FY20” said Goh.

The aerospace division is described as the frontman of a rock-and-roll band. However, Goh said that the group would not be neglecting its equipment business.

At present, SAM Singapore holds 101.25 million or 95.92% of the ICULS, which expire on Sept 25 next year. The conversion of the ICULS may narrow its public spread further.

On this, Goh said that this issue would need to be addressed by SAM Singapore.