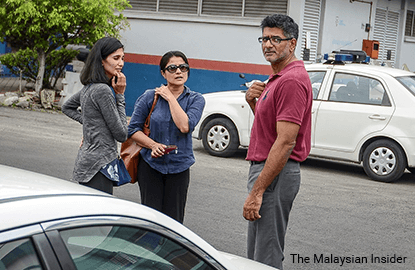 KUALA LUMPUR (Aug 21): Sacked Attorney-General Chambers (AGC) officer Jessica Gurmeet Kaur is expected to file a judicial review to challenge a deportation order issued against her by the Home Ministry.

The Singaporean, who has lived in Malaysia for 20 years, is also seeking to challenge her termination from her employment at AGC, where she was involved in the task force probing into 1Malaysia Development Berhad (1MDB).

Sources told The Malaysian Insider that her lawyers were preparing court papers for the judicial review on grounds that the order was unreasonable, arbitrary and unfair.

"She was not given the right to be heard," said a source close to Jessica's lawyers.

The source said the act against Jessica was an act of intimidation and harassment ‎towards a civil servant.

"She has served loyally and diligently in the Malaysian civil service and it's unfair to deport her when she has not committed any offence,” the source added.

According to news portal Malaysiakini, Jessica was also expected to file an affidavit revealing why the authorities were so keen on terminating her services at the AGC.

Earlier, The Malaysian Insider reported that Jessica had her permanent residency revoked and her two children's residency permits were also cancelled.

Her police bail was revoked last Friday, a source was quoted as saying.

A lawyer, who declined to be named, confirmed that her service with the AGC was terminated last week but added that he had no knowledge of the deportation order.

"I am surprised by the turn of events and expected the Malaysian authorities to keep her here as she has a lot of confidential information,” the lawyer said.

On August 1, Jessica was arrested along with former Malaysian Anti-Corruption Commission (MACC) adviser Tan Sri Rashpal Singh and held for a day for questioning in connection with leaks into the 1MDB probe.

They were later released on bail after police recorded their statements.

She headed the task force secretariat, administration and finance department.

Rashpal, who is a former member of the MACC advisory board, was said to have met Sarawak Report editor Clare Rewcastle-Brown in London.

MACC director of strategic communications Datuk Rohaizad Yaakob issued a statement last month saying Rashpal had no access to the agency's ongoing probe as his tenure as a board member had ended in February.