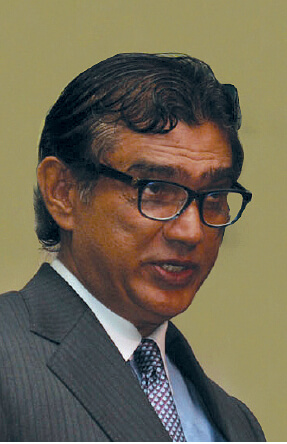 Sam: We have chosen the RSPO long before MSPO was talked about.

In a media briefing last week, Sabah Forestry Department director Datuk Sam Mannan said the East Malaysian state has the right to choose what it thinks best in matters that concern its land, forest and water, as stipulated under the Malaysia Agreement 1963.

“We can choose what we think is best. If anything (new rule or policy) is going to touch on these issues, they must be referred to Sabah’s cabinet.

“We have chosen the RSPO long before [the] MSPO was talked about. [The] MSPO can carry on — we are not against any system that will improve the performance [of the palm oil industry], but in the end, we will decide what we want. This is our land, our rights, our hardwork, [and] our failures or successes,” he said.

Sabah aims to be first fully RSPO-certified state by 2025, Sam said, and warned that his officers would not be detracted from that goal by those wanting to instruct them on what is required under the MSPO instead.

“[If] you get somebody with no power to come here and enter our forest land under me, and tell my people what to do, I will arrest you on the spot. Don’t pretend you have the power when you don’t. This is a state matter,” he said.

Plantation Industries and Commodities Minister Datuk Seri Mah Siew Keong announced in February this year that every plantation in Malaysia must be MSPO-certified by the end of 2019 to elevate the industry to global standards.

Introduced in 2015, complying with local certification is currently on a voluntary basis.

The ministry has set a timeline for plantation industries across the nation to comply with the MSPO. Those that are already RSPO-certified must comply with the MSPO by Dec 31, 2018. Those without certification should do so by June 30, 2019, while smallholders must do so by Dec 31 that year.

Mah has reportedly said that the local certification covers some 80% to 90% of the RSPO’s requirements and is less strict for smallholders when compared with the RSPO. He also touted the MPSO as more realistic and practical.

In contrast, the RSPO certification that was introduced by the group of the same name in 2005 currently has some 3,583 members made up of various stakeholders to promote the growth and usage of sustainable palm oil products globally.

Sabah has set up a steering committee last year to guide the state’s stakeholders, including an estimated one million smallholders, towards its RSPO goal, with the help of experts in conservation and sustainable economic development.

“We are spearheading it (this RSPO push) as it is our survival plan. We plan to take away more forests for conservation, but we need all that money from oil palms as it’s been started [here] anyway. Now it is payback time,” he said.

The department, which is the biggest landowner in Sabah with some 200,000ha of oil palm plantations, plans to conserve and restore work in forest reserves by working with large plantation firms, said Sam.

As it is, he said Sabah is not able to compete with Indonesia or even Sarawak on land mass, cost of production or availability of workers.

“We have 1.6 million hectares of oil palm [now] and we can go up to no more than two million. So why would people come to Sabah to buy palm oil if they can go to Africa and South America? They will come because of the jurisdictional certification, the [RSPO] brand and [good] governance. We can pool resources [to get Sabah RSPO-certified] instead of doing one estate or forest management unit at a time,” he said.

However, the year-old steering committee faces challenges, like in defining what constitutes high-conservation-value forests, which will go towards determining compensation quantums, as well as legality issues related to land involving smallholder plantations and certification costs.

But Sabah is positive on its prospects under the RSPO. Sam said the state expects to record crude palm oil exports worth RM20 billion in five years, up 33% from RM15 billion currently, as it moves towards the jurisdictional RSPO certification, which it expects will improve the yield of its plantations. The Sabah government forecasts that it could earn about 7.5% or RM1.5 billion in terms of sales tax from crude palm oil (CPO) exports.

According to the Malaysian Palm Oil Board, Sabah, which has some 1.4 million hectares of mature trees out of the planted 1.6 million hectares, is the biggest CPO producer in the country. Between January and September this year, Sabah’s CPO output grew 3.6% to 3.7 million tonnes — which represented 26.2% of the country’s total production in the period — from 3.57 million tonnes in last year’s corresponding period.