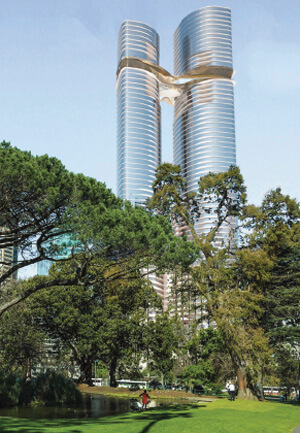 An artist’s impression of the latest iconic development by S P Setia located at 308, Exhibition Street in Melbourne, overlooking Carlton Gardens, the soon-to-be home to Shangri-La Hotel in Melbourne.

“Through the design and construction phases and for many decades to come as a luxury residence, retail and hotel precinct, the economic benefits of this project will be significant for Melbourne,” he told a press conference here yesterday.

The second tower will include over 300 luxury residential apartments as well as office space. The two towers will be connected by a sky bridge and retail space will occupy the lower levels of the development. The developer obtained the planning approval about half an hour before the start of the press conference.

“Shangri-La is privileged to be selected as the hotel operator for this world-class S P Setia development, which will be an architectural masterpiece and an iconic part of Melbourne’s skyline for decades to come,” said Shangri-La Asia’s chief executive officer (CEO) Lim Beng Chee. “We look forward to bringing Shangri-La’s hallmark ‘hospitality from the heart’ to Melbourne, Australia’s event capital.”

S P Setia president and CEO Datuk Khor Chap Jen said the group wanted to anchor the development with a hotel. “And the first hotel that came to our mind is Shangri-La Hotel. We were absolutely delighted that they were interested to expand to Melbourne. With this partnership, the development will become one of the iconic ones in Melbourne,” he said.

S P Setia Australia CEO Choong Kai Wai said the development has a total construction cost of A$480 million (RM1.52 billion), with the hotel costing A$280 million and the residences A$200 million. The developer will employ about 1,000 workers during the construction phase.

“We will have 350 workers on site and 650 in factories. After completion, the development will provide about 1,000 ongoing jobs. And with Shangri-La having a strong presence in China, we expect to bring in millions of tourism dollars to Melbourne and the state of Victoria,” said Choong.

This Shangri-La Hotel will be its first in Melbourne. “We have been in Australia for a long time; we have properties in Sydney and Brisbane. Melbourne is a market we have to come into. S P Setia has been in Melbourne for over seven years and it understands the market, so we don’t have to do it on our own. It is one of the rare cases where we got involved even before the development has gotten the planning approval,” said Lim.

Noting that big ballrooms is a signature of Shangri-La Hotels, Lim said the ballroom in the Melbourne hotel will have an advantage over the others as it will overlook Carlton Gardens.

“We intend to keep the hotel and sell the residences. The gross development value (GDV) for the residences is A$480 million. We will call for tender in August for construction of the two towers,” said Choong.

“We have had a lot of inquires about the project. So there is strong interest. It is most likely that the two towers will be built concurrently. We are planning to launch the development this month,” said Khor.

The development is S P Setia’s fifth in Melbourne. S P Setia acquired the high-profile site, which fronts Exhibition and La Trobe Streets, from telco Telstra for A$101 million last year. Its first project, Fulton Lane in Melbourne, was handed over in late 2015 and its current project, Manson Carnegie, has a take-up rate of 70% since its launch in August last year. S P Setia expects to launch the A$38 million project in Prahran, Melbourne in the second half of the year.

Aside from Australia and Malaysia, S P Setia also has projects in Vietnam, Singapore, China and the UK. As of March 31, it has 30 ongoing projects with an effective stake of 5,141 acres (2080.48ha) of undeveloped land banks worth RM75.72 in GDV.