S P Setia in no rush to develop I&P land 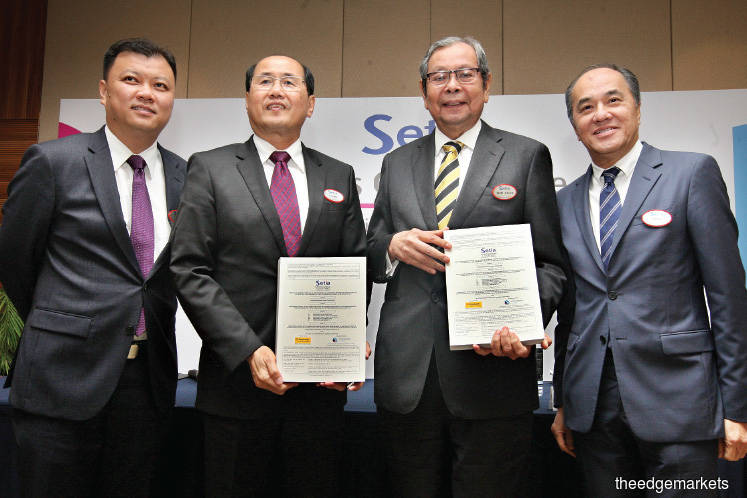 KUALA LUMPUR: S P Setia Bhd, which will get a 78% land bank boost from its acquisition of I&P Group Sdn Bhd from Permodalan Nasional Bhd (PNB), is in no rush to start developing the new sites.

S P Setia president and chief executive officer Datuk Khor Chap Jen said it will not be developing the land aggressively in the first half of 2018, but instead will meticulously plan its developments in order to add value.

The country’s biggest listed developer by sales is set to increase its land bank in the Klang Valley and Johor from 5,452 acres (2,206.34ha) to 9,728 acres, following the completion of its acquisition of I&P by year end — which will propel it to become the country’s third largest property developer by land bank after Sime Darby Property Bhd and UEM Sunrise Bhd.

“The first thing that we will do is to review all the plans that they (I&P) have, and we definitely want to add value ... we think we can add more value to their land. For example, some of their land is located in matured areas such as [Bandar] Kinrara [in Puchong, Selangor], we want to sweat the land more,” Khor told a news conference after the group’s extraordinary general meeting (EGM) yesterday.

“This would be our area of focus for the next few months and once we get the plans in place, we will push ahead with the execution. So, the first half of 2018 would be [about] planning and the second half through  2019 would see us rolling out a lot of projects,” he added.

S P Setia on June 22 entered into a conditional share purchase agreement to acquire I&P from PNB for RM3.65 billion. In conjunction with the acquisitions, the group proposed a fundraising exercise to raise up to RM3.6 billion.

Earlier at the EGM, S P Setia shareholders gave the nod for the acquisition and fundraising exercise.

As for manpower allocation after the acquisition, Khor said a reorganisation structure in terms of job allocation had already been put in place for 2018.

“From the beginning of next year, certain units will be spearheaded by the I&P team and certain units by the S P Setia team, with staff of I&P coming in for I&P projects and certain I&P staff will be incorporated into the main Setia team. All these have been discussed, thought through and ready for implementation,” he added.

S P Setia shareholders also gave the nod for the group’s acquisition of a 342.5-acre piece of land in Bangi, Selangor from Seriemas Development Sdn Bhd, an indirect subsidiary of PNB, for RM447.58 million. For clarity, the Bangi land is already included in the group’s 9,728 acres of land bank.

The proposed development in Bangi is expected to generate an estimated gross development value of RM2.74 billion.

Meanwhile, Khor said it is too early to discuss the group’s sales target for 2018.

“It is too early to say as we are focusing on achieving this year’s sales target of RM4 billion, but we will not do less than this year,” he said. For the first nine months of this year, S P Setia has secured RM2.82 billion in sales.

On the outlook for the property market, Khor believes it will pick up in 2018.

“Whether it’s a very slow or strong pickup that depends on whether there are catalysts to drive the market.

“A lot of people are saying that [property purchases] have been held back due to the [imminent] elections and after elections there could be a strong pickup. I think these are the catalysts or factors affecting the market,” he said.

“At the moment, [the market] is quite flat, but every time we launch any landed properties with mid-range [pricing] the demand is there,” added Khor.