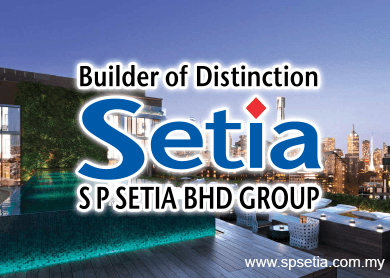 KUALA LUMPUR: S P Setia Bhd’s net profit for the second quarter ended April 30, 2015 (2QFY15) jumped 206% to RM227.2 million or 8.94 sen a share, from RM74.27 million or 3.02 sen a share a year ago, on increased revenue and profit recognition from the handover of the group’s first residential tower in Fulton Lane, Melbourne.

The group has also recommended an interim single-tier dividend of four sen per share in respect of FY15 — consistent with the prior year’s payout — and a dividend reinvestment plan will apply to this interim dividend, said S P Setia in a statement yesterday.

“With higher revenue and profit recognised from the development of its strong sales pipeline built to date, and the timely staged handover in Fulton Lane, the property development division achieved a 47% higher revenue and a 57% higher PBT (profit before tax) for the current period to date. The group is also expected to hand over the second residential tower in Fulton Lane in the second half of the financial year,” the statement read.

The group achieved RM774 million in sales for 2QFY15. As at May 31, total sales for the first seven months of FY15 stood at RM2 billion, the statement noted.

“While sales from Malaysian projects registered an improvement for the second quarter, the international projects posted weaker sales, largely due to the uncertainty surrounding the United Kingdom housing market prior to the general election having an impact on sales in Battersea Power Station,” the statement added.

The group’s sales target for FY15 has been revised to RM4 billion.

S P Setia shares closed up five sen or 1.5% at RM3.38 yesterday, with a market capitalisation of RM8.75 billion.