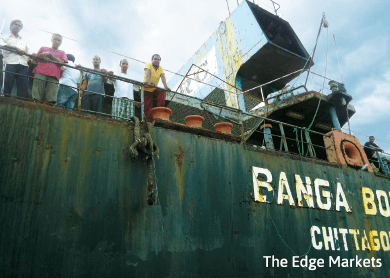 PORT KLANG: Two rusting ships which have been lying idle at Port Klang for over five years will most probably be towed away by its owners to the port city Chittagong in Bangladesh, according to a local representative of the ships’ owners.

However, this will depend on the outcome of the court case that HRC Shipping Ltd has filed against the Malaysian Marine Department to stop the sale of the ships, Banga Biraj and Banga Bodor, through a tender.

The company’s local subsidiary HRC Shipping Sdn Bhd filed the case after the tender notice was issued early last month. However, the saga of the two ships looks set to be prolonged as they are not believed to be seaworthy and massive repairs will be needed before they can even be towed away to the high seas.

Its local manager Rois Hamid said the vessels needed repairs as towing them in their current condition could be risky.

It is believed that HRC Shipping Ltd has been planning to relocate the ships for a long time, but had been delayed by funding problems. The ships have been lying idle off the waters of Port Klang over the last five years.

Rois said the 13 crew members from both ships were supplied provisions on a weekly basis and denied claims that the crew were going hungry.

“They have enough food supplies and other essentials. As for the salary, it is handled by our headquarters in Dhaka,” he said referring to the crew’s claim that they have not been paid salaries for several months.

To date, HRC Shipping Ltd has yet to reply to enquiries from The Edge Financial Daily (TEFD) on why the ships have been left idle here and on their plans for the two vessels.

Previous news reports indicate that the company had eight ocean-going vessels and seven were idle. However, it is not clear what the current status is of the other vessels belonging to HRC Shipping Ltd. TEFD reported yesterday that the two ships were rusting away and had been anchored in deep waters off Port Klang, but last month both broke their anchors when the tide was unusually high. They drifted dangerously before tugboats from Northport towed them to safety and ran them aground, away from the shipping lanes.

The Banga Bodor also rammed into another vessel, but fortunately both ships sustained only minor damage. The saga started when the 11,804-tonne Biraj damaged two container quay cranes while berthing at Northport on Oct 22, 2008. HRC Shipping Ltd gave an undertaking to Northport to pay for the damage and the vessel was allowed to set sail the following day.

However, the company failed to pay for the damage and on a subsequent call at Port Klang on May 4, 2010, the vessel was served a detention order by the Shah Alam High Court following a petition by Northport to recover costs.

A Northport spokesman said all rights of claim to the ship were subrogated to its insurance company Takaful Ikhlas Sdn Bhd.