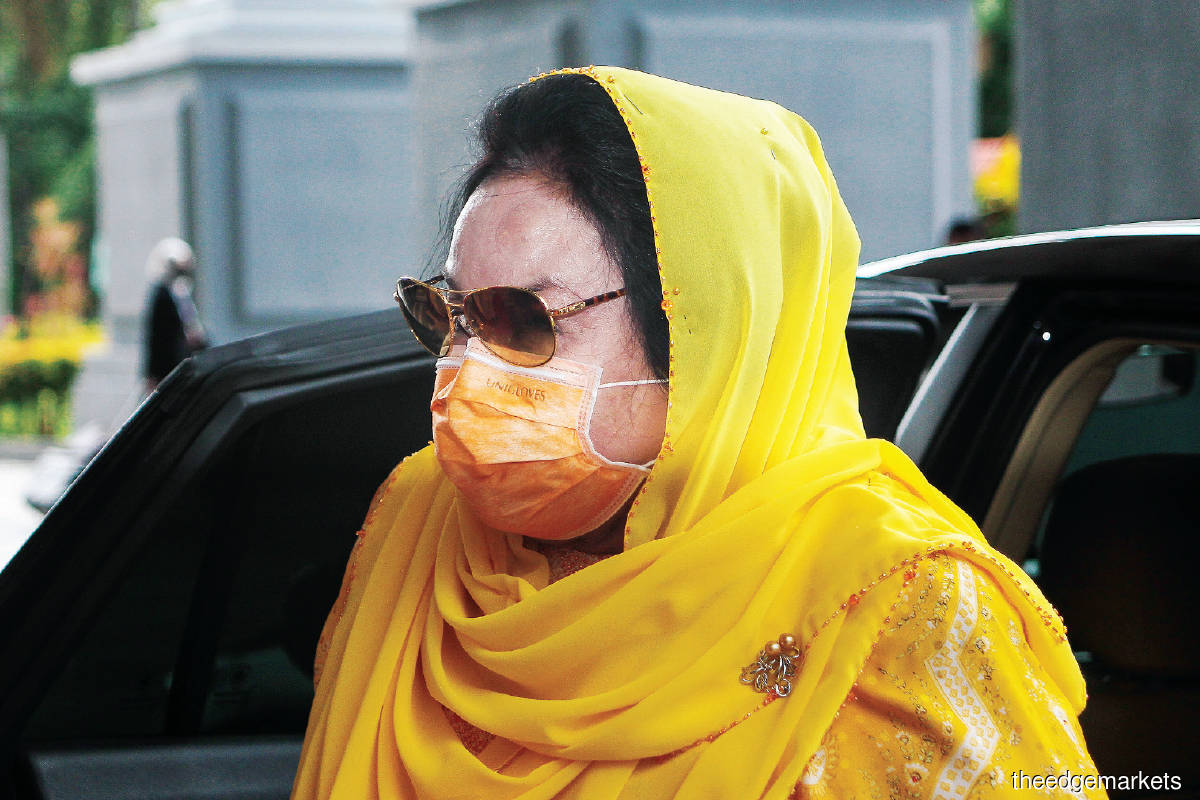 Rosmah has accused Mahdzir, Madinah and Alias of colluding with the prosecution in a conspiracy to maliciously and selectively charge her with graft (Photo by Zahid Izzani/TheEdge)

WITH her back seemingly against the wall, Datin Seri Rosmah Mansor last week asserted that several prosecution witnesses were making her the “fall guy” in a bid to hide their own transgressions in relation to corrupt activities in the RM1.5 billion solar hybrid project for Sarawak schools.

More specifically, she contended that her former staff Datuk Rizal Mansor, former education minister Datuk Seri Mahdzir Khalid and the ministry’s former secretaries-general Tan Sri Madinah Mohamad and Datuk Seri Alias Ahmad had falsely testified against her to portray her as the offender. The aforementioned witnesses have already testified that Rosmah played a vital role in pressuring them to expedite the approval of the solar project.

Although she could not explain their motive, she had previously pointed out that she held no position in the government and hence, had no power to approve any government projects.

During cross-examination from Datuk Seri Gopal Sri Ram, the former premier’s wife strongly denied any instance of asking Mahdzir, Madinah and Alias to expedite the approval of the project and, instead, accused them of colluding with the prosecution in a conspiracy to maliciously and selectively charge her with graft.

Sri Ram read out Mahdzir’s witness statement, in which he testified that Rosmah had — on the night of June 23, 2016, in Seri Perdana — asked him about the hybrid solar project, to which he had said that he would “look into it”. Mahdzir testified that Rosmah had contacted him again six months later, on Dec 22, insisting that he abide by the minutes stipulated by her husband Datuk Seri Najib Razak regarding the award of the project.

“It is clear that Rosmah has an interest in this solar project by the education ministry,” Mahdzir had testified.

Sri Ram: So can you give me and his lordship (judge Mohamed Zaini Mazlan) any reason why Mahdzir should tell a lie against you?

Rosmah: That you have to ask him.

Sri Ram went on to read out the testimonies of Madinah and Alias, who stated that Rosmah had asked for the project and its initial payment to be expedited.

Sri Ram: You heard their evidence against you that you asked them to help Jepak?

Rosmah: Sri Ram, you have to ask them that.

Sri Ram: Can you give a reason why Madinah and Alias would concoct this evidence against you?

Rosmah: You have to ask them.

Sri Ram: Can you give any reasons?

But the person singled out was Rizal, who Rosmah alleged had solicited the bribe for RM187.5 million (out of the RM1.25 billion project). It was also Rizal who had received the RM6.5 million cash contained in the four bags delivered by Jepak Holdings Sdn Bhd boss Saidi Abang Samsudin to the Prime Minister’s Office and residence, and not her, Rosmah maintained. She claimed that Rizal had done a deal with the prosecution to have his charges dropped.

But she conceded under cross-examination that there were no quarrels between them.

Although he was “an incompetent worker”, she had helped him get a “datukship” from Pahang.

“Saya kesian (I pitied him). I don’t give the title; I did not obtain it for him. It is up to the Pahang government to give. He may have entered his name through others, which I do not know of,” Rosmah said.

Sri Ram: Throughout your relationship with Rizal, apart from his role in issuing statements, have you ever had a quarrel with him?

Sri Ram: Yet, you accuse him of conspiracy against you with the prosecution?

Rizal, a crown witness in the trial, had testified against his former boss. He was acquitted in January 2020 and placed under witness protection.

‘Four bags of cash taken by Rizal, not me’

Datin Seri Rosmah Mansor last week refuted the prosecution’s claim that she had received four bags of cash amounting to RM6.5 million, maintaining instead that the funds had been taken by her aide Datuk Rizal Mansor, whom she accused of conspiring with the prosecution to have her convicted in order for him to be freed of charges.

The cash-laden bags are a central point to Rosmah’s two graft charges, as the wife of former prime minister Datuk Seri Najib Razak has been charged with receiving a total of RM6.5 million from Jepak Holdings Sdn Bhd former managing director Saidi Abang Samsudin in return for helping his company secure a RM1.5 billion solar project from the government.

At the prosecution stage, Saidi had told the High Court that he had withdrawn the cash and placed them in the bags prior to sending them to her residence. Other prosecution witnesses had also testified that two of the bags had been delivered to the PM’s official residence in Putrajaya, and another two to his private residence in Jalan Langgak Duta on Dec 20, 2016, and Sept 7, 2017, respectively.

Testifying in her own defence, she insisted she had not been at the PM’s official residence in Putrajaya on the December date, and maintained she had an alibi to prove that she was in Kuala Lumpur instead.

Asked by lead prosecutor Datuk Seri Gopal Sri Ram where she was on the date if not in Sri Perdana, she replied, “All over the place in KL.”

Sri Ram pointed out that Rosmah had not mentioned in her witness statement that she was not in Seri Perdana on that date, implying it was an afterthought. He also pointed out that both Saidi and his former partner, Rayyan Radzwill Abdullah, had confirmed that the bags had gone into her house “and never came out”.

Sri Ram: My question is, is there any reason that Rizal should falsely implicate you, that you instructed the butler to take the bags into your room?

Rosmah: That, you have to ask Rizal.

Sri Ram: I put it to you that you instructed Rizal to negotiate with Saidi on the Jepak project.

Rosmah: No, definitely not.

Rosmah: No, definitely not; that is absurd.

Arguably the country’s most high-profile housewife — who has grabbed headlines around the world for several reasons, including her lavish shopping sprees at high-end boutiques — Datin Seri Rosmah Mansor took the witness stand at the Kuala Lumpur High Court last week in a much-anticipated testimony that saw her shed a few tears at what she perceived as the ignominy and injustice of the selective and malicious prosecution of herself and her family.

Kuala Pilah-born Rosmah, however, is no ordinary housewife, being the spouse of Datuk Seri Najib Razak, the country’s prime minister for nine years until May 9, 2018.

While Najib is on trial for offences related to 1Malaysia Development Bhd and SRC International Sdn Bhd (he has already been convicted and sentenced to 12 years’ jail and fined RM210 million), Rosmah faces graft charges in relation to a solar hybrid project for the benefit of 369 rural schools in Sarawak, a state as large as Peninsular Malaysia.

If Rosmah was downbeat, her court attire was not. For her appearance in court over three days, she wore bright pink, turquoise and yellow baju kurung, with matching selendang and handbag. Before testifying, she would be aided to the witness pedestal by her assistant, who would place her handbag in front of her on a platform used as a table, facing the judge.

Crying on the witness stand

Perceived as fierce and strong-willed, she showed her softer side when she sobbed at the end of her examination-in-chief by counsel Datuk Akberdin Abdul Kader on the second day, when she asserted that the charges were malicious, fabricated and selective against her.

Initially charged with her for graft, her aide and media officer Datuk Rizal Mansor had been acquitted of all charges despite admitting while under cross-examination that he had received RM1 million and an umrah package for his whole family.

Acquitted in January 2020, Rizal turned prosecution witness and testified against his ex-boss. The Malaysian Anti-Corruption Commission (MACC) has put him under the witness protection programme.

He was incompetent, irresponsible and lacked discipline, Rosmah said of Rizal. “He could not write my speech text well to the level of a PM’s wife. He had disciplinary problems as he always ‘hilang’ (went missing) from work. I was not satisfied with the quality of his work as he needed constant supervision [so] that he would not avoid completing his work.

“I also heard similar complaints from FLOM’s special officer, Datin Seri Siti Azizah Sheikh Abod,” added the former self-styled First Lady of Malaysia (FLOM), as she liked to be referred to, but did not explain why she had not terminated his employment.

Rosmah, who turns 70 in December, also set her sights on former education minister Datuk Seri Mahdzir Khalid, a member of her husband’s Cabinet, who testified that she had twice pressured him to approve the solar project to Jepak Holdings Sdn Bhd.

In turn, Rosmah’s counsel accused Mahdzir, a former Umno vice-president, of being on the take for soliciting a RM60 million bribe from Jepak — an allegation that the member of parliament for Padang Terap denied.

Under cross-examination, Rosmah stood her ground, although when she proved too evasive in her answers — “How can I question her like this?” Sri Ram was heard saying of her non-answers — the presiding judge, Justice Mohamed Zaini Mazlan, prodded her politely to answer.

Rosmah’s cross-examination continues on Oct 21. Her defence is planning to call Najib and Siti Azizah as defence witnesses.