Rosmah: My lawyers are looking into recordings 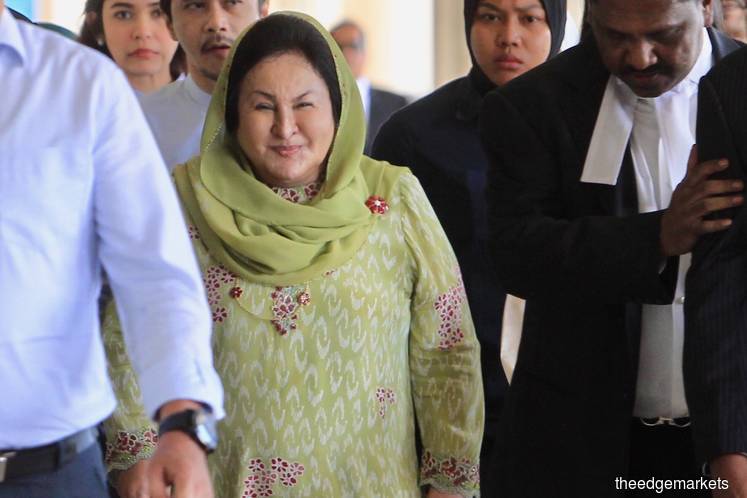 KUALA LUMPUR (Jan 8): Datin Seri Rosmah Mansor said today that her lawyers will look into a number of phone recordings revolving around her husband Datuk Seri Najib Razak and her when the former premier was sorting out the issues surrounding the investigation into 1Malaysia Development Bhd (1MDB) in 2016.

The Malaysian Anti-Corruption Commission (MACC) had released the recordings at a press conference today.

Rosmah, who was attending a case management for her graft trial, was met by reporters at the Kuala Lumpur Courts Complex after the proceedings.

"I will leave it to my lawyers. My lawyers will handle it," she said as she walked out of the courtroom. She did not take any further questions from the media.

The recordings, she said, were received by the MACC "after the new year" (January 2020).

The clips are in three parts, one of which was between Najib and a person MACC identified as Rosmah, where she was heard shouting at Najib to "advise" him on the matter.

"Will you let me advise you?" shouted Rosmah at one point. "Darling, you are the PM, you have to take control. You have goons around to advise you," she had told Najib.

From the conversation, it appears Rosmah was actively in the know about the politics surrounding Najib.

There was unhappiness towards former MACC chief commissioner Tan Sri Abu Kassim Mohamed's role in the investigations into Najib.

"They tell us to slow down on Abu Kassim, but now he is making statements," said Rosmah, referring to what MACC officials clarified as the surprise press conference by Abu Kassim on June 23, 2016 when he told the press there was no pressure for him to resign from the anti-graft agency.

Rosmah also advised Najib to bypass his then-special officer Datuk Amhari Efendi Nazaruddin to communicate with Khaldoon, and to invite Khaldoon to their home to discuss the tangle-up and resolve it once and for all.

"Bukannya dia tak kenal kita, pernah makan minum rumah kita (It is not like he (Khaldoon) does not know us, he has had a meal in our home)," said Rosmah. "Then tell the crown prince. We wasted one week already."

Najib responded that the UAE parties "wanted to see movement", and that "the Chinese side is moving already", adding that he will speak to Amhari about Khaldoon.

There were also alleged conversations between Najib and Amhari, following a failed arrangement to meet Khaldoon in Jakarta to resolve the tussle between 1MDB and International Petroleum Investment Co (IPIC), which later escalated into an international arbitration.

After the recordings were played, Latheefa said: "Based on our understanding there are signs of abuse of power, obstruction of justice, and fabrication of false evidence based on the recording."

Latheefa said the recordings will be given to the relevant authorities while it continues with its part of the investigation.