AS sports fans converged in Phoenix, Arizona in the United States on Sunday to watch the Seahawks play the Patriots in the Super Bowl XLIX, Rolls-Royce showed off a bird of its own, the US$569,000 (RM2.025 million) Phantom Nighthawk edition.

It’s a matte black convertible aimed at making Rolls seem relevant and cool — and at displaying how creative you can get if you have tens of thousands of dollars to spend on a custom-made whip. The company revealed it to select clients and celebrities at private showings in the days before the game.

As the only convertible in the Rolls-Royce stable of cars, it’s an incredible amalgamation of world-class beauty, luxury, and performance. The handcrafted luxury ride is one of most rare and expensive cars in the world.

“The Phantom Drophead Coupe Nighthawk demonstrates just how special our bespoke programme can make our cars,” Eric Shepherd, president of Rolls-Royce North America Inc, said last week during a lunch at the Four Seasons. “More than 80% of all our models are bespoke, and with the Phantom it’s virtually all of them, so it’s fitting that we are bringing a Phantom to Arizona.”

As you might expect from its name, the car takes several design cues from stealth bombers. That’s right, it’s named after the F-117 Nighthawk stealth fighter. One look at this menacing machine and it becomes clear that this Roller is no Grey Poupon mobile. With its bright red leather interior and enough carbon fibre to make a Formula One car jealous, this thing is pure Sriracha plus Tabasco plus hit of Habanero.

It’s low and sleek, with adaptive light-emitting diode headlamps and a glowing bar of daytime running lamps. With matte black paint inside and out, the car includes leather and carbon fibre on the dashboard, door panels, and instrument panels. The windscreen is made from the same radar-absorbing material that fighter jets use; the entire trunk is trimmed in leather.

Nine will be made, and Shepherd said many have sold already. He probably sold the rest during the game last weekend. — Bloomberg 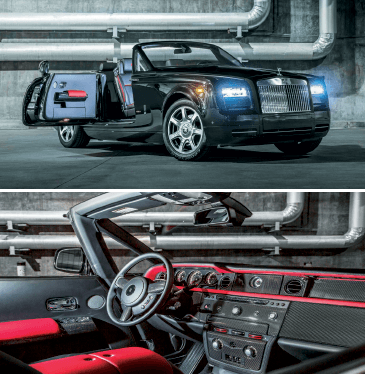