MALAYSIA yesterday witnessed “no ordinary power” with the launch of the Rolls-Royce Ghost Series II in Kuala Lumpur.

Since its launch in 2009, the Ghost has become the ultimate symbol of success for leading entrepreneurs across the globe and in Malaysia.

Building on this success is Ghost Series II, with an updated range of innovative technological, design and engineering features that position it as the choice modern super-luxury car for the executive on the go.

“Malaysian customers have embraced the Ghost as the benchmark super-luxury saloon car, along with the Phantom. The Ghost Series II continues with a higher level of bespoke exclusivity, quality and perfection that is quintessentially Rolls-Royce,” said Rolls-Royce Motor Cars Asia-Pacific general manager for sales Sven Ritter.

“Ghost has been very successful for us in Malaysia, and it is this reputation that has helped us win hearts and minds across the country, including Sabah and Sarawak,” said Rolls-Royce Motor Cars Kuala Lumpur managing director Datuk Michael Ong.

Rolls-Royce Motor Cars Kuala Lumpur will be celebrating its fifth anniversary since the announcement of its dealership appointment in January 2010. In view of this, it is planning to hold its “Drive the Icon” event from tomorrow to Dec 14. 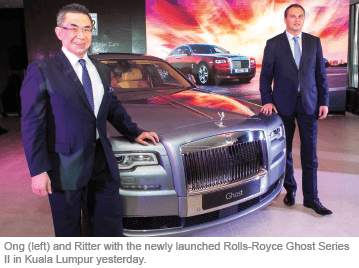