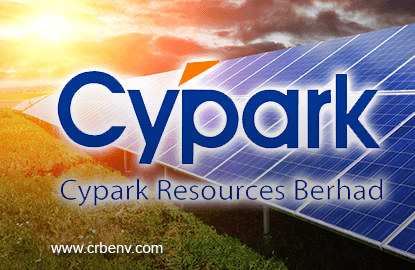 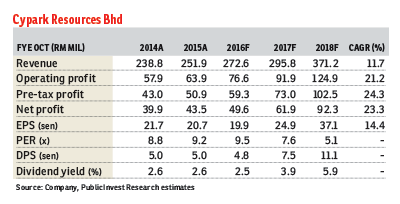 All segments, except for the landscaping and infrastructure segment, recorded impressive year-on-year (y-o-y) growths.

Its environmental engineering segment registered a 29.4% growth in revenue due to more work activities in Phase 2 of the Ladang Tanah Merah (LTM) project upon Cypark’s formalisation of appointment as engineering, procurement, construction and commissioning contractor in 4QFY15.

While contributions from the maintenance and renewable energy (RE) segments were relatively small at 16.6% of total revenue, the segments registered healthy 47.1% and 7.7% y-o-y growth respectively.

Revenue from the landscaping and infrastructure segment was relatively flat at -4.6% y-o-y.

Its net profit margin improved slightly to 14.8% versus 14.2% in the previous corresponding year.

We see robust growth in FY18, driven by the commissioning of its 20mw biomass and 5MW biogas plants.

Commercial operations of both plants are expected by end-calendar year 2017 and the company expects to receive full scope of renewable energy revenue by then, which will be reflected in FY18.

In addition, we ascribe a lower price-earnings multiple to the non-RE segment (from eight times previously to six times) to account for earnings volatility in the construction, landscaping and maintenance business segments. — Public Investment Bank, April 1