As robots advance, up to 5 in 10 Malaysian jobs at risk

BEHIND THE STORY: At risk of being displaced? by theedgetv 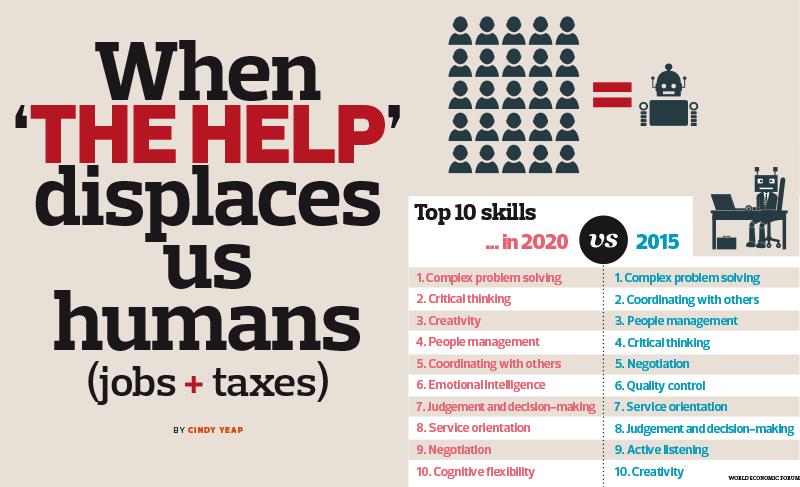 KUALA LUMPUR: Some 18,000 people who lost their jobs in Malaysia in 2015 were from the banking industry, due to the introduction of "disruptive technology", as Malaysian Employers Federation executive director Datuk Shamsuddin Bardan terms it.

More layoffs are expected to come and those at risk are not just workers in the banking industry. "More than 70% of all semi-skilled and 80% of all low-skilled jobs are at high risk. These occupations cut across all major economic sectors. Skilled jobs are not spared -- about 40% of skilled jobs are at medium risk," he told The Edge Malaysia, citing data from the Khazanah Research Institute (KRI).

Simply put, the world as we know it, is set to drastically change in the coming decade, thanks to advancements in robotics and artificial intelligence (AI), wrote The Edge senior editor Cindy Yeap in the publication's cover story 'When ‘THE HELP’ displaces us humans' for the week of Oct 23-Oct 29.

A case in point: Fukoku Mutual Life Insurance, which earlier this year replaced 34 employees with an AI system that can calculate policy payouts more efficiently. The Japanese insurer expects to save ¥140 million a year from the ¥200 million investment in IBM’s Watson Explorer AI system that will cost about ¥15 million a year to maintain.

The Edge highlighted, citing KRI in a recent report, that between 11% and 54% of current jobs in Malaysia — that's as many as 5 in 10 — could either be fully displaced or see their nature “considerably change” over the next two decades due to advancements in automation. And four out of five of these jobs are middle-skilled and mostly held by Malaysians, while up to 77% of low-skilled jobs that are held by migrant workers could go.

Not just jobs, but whole industries are at risk or at inflection points as the robots march forth. Stanford University economist Tony Seba, for instance, in May this year predicted that petrol or diesel cars could vanish in eight years in favour of electric vehicles (EVs), which are 10 times cheaper to run than fossil-based cars.

The risk is real and national oil company Petroliam Nasional Bhd (Petronas) is paying close attention. Less than two weeks ago, Petronas Dagangan Bhd announced it has teamed up with Malaysian Green Technology Corp (GreenTech Malaysia) and a unit of Tenaga Nasional Bhd to install 100 EV charging stations and solar photovol-taic (PV) panels by next year and increase that in tandem with market demand.

Dr Yeah Kim Leng, professor of economics at Sunway University’s Business School, thinks “the appropriate policy response is not to reject or impede technological progress but rather to embrace it as a means to raise living standards, complementing it with re-skilling and retraining programmes for the displaced workers".

In addition, he told the weekly that "digital divide and income inequality should be viewed as natural consequences of market forces that could be tackled through appropriate tax and benefit system design”.

Which raises the question: Should Malaysia consider robot taxes? According to The Telegraph, South Korea introduced in August this year what may be the world’s first tax on robots — when the country cut tax incentives for investments in automated machines that were previously introduced to boost productivity.

This is not likely to go down well with employers, but even billionaire Bill Gates thinks robots (essentially the owner of the machine) should pay income taxes to help people whose jobs were displaced, to help in funding the re-skilling of people who lost their jobs, the weekly noted.

Meanwhile, what is the one thing Malaysia needs to do right fast? “Start learning about the future of technology and start teaching the children about it. Let’s change the mindset. The [current] mindset is we have to follow, we can’t lead. The mindset needs to change from following to leading to leapfrogging. How can we jump ahead? How can we lead the world? This is what has to happen and it all starts by learning,” says technology guru Vivek Wadhwa.

Grab a copy of The Edge today to follow the discussions and get a better look at the jobs that will be displaced, the consequences to society when that happens, and the policy changes that should be considered to help the soon-to-be jobless.