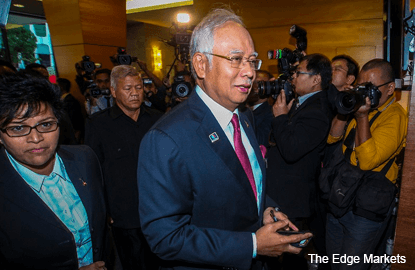 Brown told Australia's ABC News in an interview that they had evidence to back this up, and that ongoing international investigations into 1MDB would likely lead authorities to Najib.

"Our reporting has shown for months now that the money did not come from the Saudis but it came via a bunch of companies and bank accounts related to 1MDB.

"Our story hasn't been called into question yet and we have lots of evidence to back that up," said Brown in the interview, which was uploaded onto ABC News on Feb 12.

He said the "real action" now were the overseas investigations into 1MDB, and said information would slowly trickle out in the next few months.

"I think, you know, it will be hard to keep it away from the PM," said Brown, referring to the direction of the investigations.

Calling the proposed amendments an "extreme action", he said it was no surprise that it was mooted shortly, after Apandi directed investigations into the funds be closed.

"They've gotten a big backlash from that and now they come out and say no one can speak about that," said Brown.

He said the proposal to charge journalists who refused to disclose their sources was also a move to cripple news organisations.

"Last year they shut down a couple of news organisation that had been reporting on the scandal. So this is part of that.

"They're really trying to limit hat because the more they come down the more it looks worse for the government."

But after six months of investigation, Apandi on Jan 26 said there was no criminal wrongdoing as the funds Najib received was a donation from "the Saudi royal family".