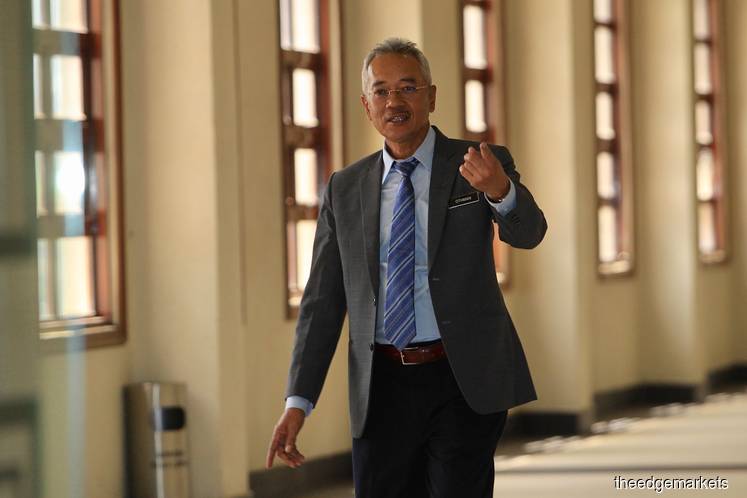 KUALA LUMPUR (Feb 17): The award for the solar hybrid and diesel generator set project to Jepak Holdings Sdn Bhd through direct negotiations did not follow procedure, and the company’s RM1.25 billion quotation of the project was accepted without any discussion, said a witness today.

The Finance Ministry's deputy secretary-general of Treasury Management Datuk Othman Semail said the project was offered to Jepak on Nov 10, 2016.

He told the High Court that the project needed to be processed by the government procurement division of the Finance Ministry.

To his knowledge, although the project was awarded via direct negotiations, it did not adhere to the guidelines set by the Finance Ministry, regarding such negotiations.

When asked by deputy public prosecutor (DPP) T Deepa Nair, he said as far as he knew, no physical valuation was done, although it was required for all physical projects worth at least RM50 million.

Othman, 58, is the seventh prosecution witness in the trial involving Datin Seri Rosmah Mansor, the wife of former prime minister Datuk Seri Najib Razak, who was also the then finance minister.

The witness added that the documents submitted did not give him a clear picture about the necessity of the project, its scope, and the ability of both the education ministry and Jepak to undertake the solar hybrid project, which is intended to provide electricity to 369 rural schools in Sarawak.

The witness was concerned that the project implementation could run counter to integrity and good governance.

He added that he referred the application to the Procurement Committee of the First Finance Minister (JPMK1), as the value of the project exceeded RM100 million.

“The JPMK1 is chaired by Najib as the first finance minister. I choose this method [to obtain approval], as this is a holistic approach and takes into consideration of all members in the committee,” he added.

This was despite Najib having issued various minutes to implement the project, such as one dated Dec 1, 2015 and another on June 7, 2016.

Prior to that, Othman told the court that a circular from the Finance Ministry stipulated that any application for direct negotiations must go through the government procurement division he heads.

This division will gather and analyse information from government agencies, before making appropriate recommendations to the JPMK1.

JPMK1 will then decide whether or not to allow the agency seeking to directly negotiate a contract, in this case the education ministry, to do so.

Direct negotation may only be considered for contracts involving supply, services and work done. He added that the division would process such requests, if there were directives from the palace or finance minister, he said.

“From my experience, [Najib] was the sort of leader that was visionary, forward-looking and smart. He would always tell the secretary-generals to ensure that when it came to implementing a project, it should be done properly. In other words, it should have sufficient allocation of money, and discussions should have been done.

“The project is on a big scale, involving huge cost and high risk. The directive by Najib was without proper planning, research, and consultation with the Education Ministry,” she said in reply to questions from DPP Ahmad Akram Gharib.

Rosmah is facing three corruption charges, namely soliciting a bribe of RM187.5 million from Jepak managing director Saidi Abang Samsudin between January to April 2016, and getting RM5 million cash on Dec 20, 2016 and another RM1.5 million on Sept 7, 2017, both from Saidi.