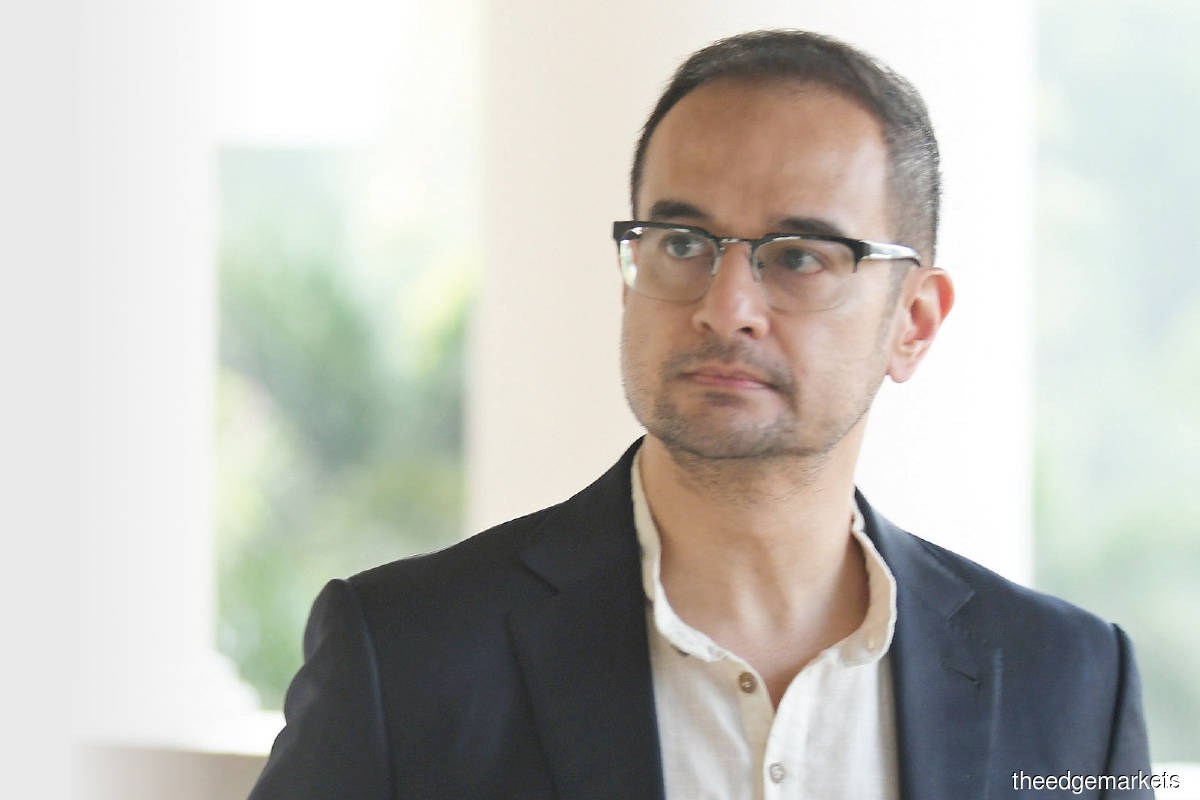 While criminal charges against Riza related to 1MDB were dropped in May last year, he is not entirely off the hook, given the civil suit by the strategic investment company. (Photo by Mohd Izwan Mohd Nazam/The Edge)

RIZA Aziz knowingly received misappropriated funds from his close confidant Low Taek Jho (better known as Jho Low), or was wilful and reckless in failing to make relevant inquiries as to the source of the funds, contends 1Malaysia Development Bhd (1MDB) in its US$248 million civil suit against the stepson of former prime minister Datuk Seri Najib Razak.

While criminal charges against Riza related to 1MDB were dropped in May last year, he is not entirely off the hook, given the civil suit by the strategic investment company, as well as three of its subsidiaries 1MDB Energy Holdings Ltd, 1MDB Energy Ltd and 1MDB Energy (Langat) Ltd.

Riza, a movie producer, is named in the suit, as are two of his companies, Red Granite Pictures Inc and Red Granite Capital Ltd.

Interestingly, 1MDB has dropped US law firm Shearman and Sterling from the list of defendants, although it previously alleged that the law firm was a conduit to launder a substantial portion of the misappropriated funds.

In the Statement of Claim (SOC) filed by Messrs Shearn Delamore at the Kuala Lumpur High Court on Sept 9, 1MDB claimed that Riza — who controlled the two Red Granite companies, which produced the award-winning The Wolf of Wall Street movie — ought to have known that the money that originated from 1MDB had been misappropriated to him and his companies for their benefit.

It said: “By virtue of his close relationship with both Najib Razak and Low, it is to be inferred that [Riza] Aziz had actual knowledge that the funds received were misappropriated from 1MDB, and/or constructive knowledge by wilfully and recklessly failing to make relevant inquiries as to the source of the misappropriated funds, such that it would be unconscionable for the Defendants to be permitted to retain the benefit of the money received.

“[Riza] Aziz did so dishonestly, in that he knew or suspected that the funds being received were misappropriations of the property of 1MDB, and/or he ought not to have turned a blind eye to, or deliberately [did not ask] questions in relation to, the source of the misappropriated funds.” According to the SOC, the trail of the diverted funds reveals that they were used by Riza to fund Red Granite Pictures’ movie operations, including the motion pictures The Wolf of Wall Street, Dumb and Dumber To and Daddy’s Home.

In addition, funds were used to purchase luxury real estate in New York, California and London, and buy movie posters and other memorabilia for Riza and his associates as well as pay for other personal expenses.

Among others, 1MDB is seeking a declaration that the defendants are liable for the sum of US$248 million, and for an order for them to pay back the sum or such other sum as the Court thinks fit, including interests and costs.

In addition, 1MDB is seeking a declaration that the company is entitled to trace the sum of US$248 million to the receipt and use of the money received by the defendants.

The relief sought is related to the Sessions Court granting Riza a discharge not amounting to an acquittal (DNAA) on five counts of money laundering involving the same US$248 million of 1MDB funds on May 14 last year, following letters of representation by Riza’s lawyers and an application by the prosecution for the DNAA.

However, the DNAA was granted subject to Riza returning part of the loot, which amounted to “several millions of ringgit”. Should the accused fail to return the sum, the prosecution may reinstate the full charges and prosecute him to the full extent of the law, the prosecutor said at the time.

A later statement by the Malaysian Anti-Corruption Commission (MACC) revealed that the Malaysian government is expected to recoup an estimated US$107.3 million, about 43.26% of the total sum of US$248 million, allegedly siphoned by Riza from 1MDB.

The progress of this payment is unclear at the time of writing. Previous news reports indicated that Red Granite had already paid off US$60 million to the US government, following a settlement agreement in 2018, in which Red Granite did not admit to any wrongdoing.

The Edge is given to understand that Riza and his two companies have yet to appoint lawyers to represent them. When contacted by The Edge, Riza’s former lawyers who represented him in his money laundering case confirmed they were not representing him in this lawsuit.

How the US$248 mil landed in Riza’s pockets

The SOC, sighted by The Edge, outlines how portions of the fundraising exercise executed by 1MDB in 2009 and 2012 were misappropriated to Low’s companies, with a portion of that ending up in Riza’s pockets. Much of the bogus agreements were already revealed in the 1MDB-Tanore criminal trial of Najib, but the lawsuit against Riza and his two companies confirms how portions of the funds were transferred to him.

In September 2009, 1MDB entered into a sham agreement with PetroSaudi Holdings (Cayman) Ltd, a purported subsidiary of PetroSaudi International Ltd (PSI), to form a joint venture called 1MDB PetroSaudi Ltd. The purported purpose of the JV was to exploit certain energy concession rights in Turkmenistan and Argentina that PetroSaudi entities purportedly owned.

Pursuant to the terms of the JV agreement, 1MDB was to invest US$1 billion in the JV for 40% equity interest in the JV company. The JV was alleged to be the vehicle by which Low and his associates defrauded 1MDB of its investments.

Just two days after the signing of the agreement, US$700 million of the US$1 billion was fraudulently transferred in the direction of Low to an account at an RBS Coutts’ branch in Singapore. The account to which the payments were made belonged to Good Star Ltd, a company owned and controlled by Low. Between May and October 2011, a further US$330 million was transferred from 1MDB to that account.

Of the misappropriated funds, Red Granite Pictures received its first US$10 million. According to the SOC, two wire transfers totalling the sum were sent from the Good Star account to a bank account at City National Bank in Los Angeles that was designated as the operating account for Red Granite Pictures.

Then, in 2012, 1MDB raised additional capital via its wholly-owned subsidiaries 1MDB Energy Ltd and 1MDB Energy (Langat) Ltd, with the stated purpose of acquiring certain energy assets and to fund its operations.

The capital raising was achieved by two separate US$1.75 billion bond issues, arranged and underwritten by Goldman Sachs. Almost immediately after 1MDB had received the proceeds of each of the bond issues, Low instructed 1MDB to wire transfer more than 40% of the proceeds to a Swiss bank account belonging to an entity called Aabar Investments PJS Ltd, a British Virgin Islands-registered corporation (Aabar BVI).

Note that the name of the Low-controlled company bears similarity to that of a legitimate subsidiary of Abu Dhabi-based International Petroleum Investment Company (IPIC), called Aabar Investments PJS. It was clarified that at all material times, Aabar BVI was in no way affiliated with the real Aabar or IPIC.

Shortly after receiving the proceeds of the bond issuance, Aabar BVI sent three wire transfers totalling US$238 million to an account at BSI Singapore held by Red Granite Capital. According to 1MDB, these misappropriations were made without the knowledge or approval of its board, were made in breach of fiduciary duties, and in no way benefited the company.

To cover up the transfers, BSI Singapore was provided with loan agreements between Aabar BVI and Red Granite Capital, purportedly to fund the aforementioned motion pictures.

This suit against Riza and his companies is one of six lawsuits filed by 1MDB and its subsidiaries in its multibillion-dollar suits against many individuals and companies (see table).