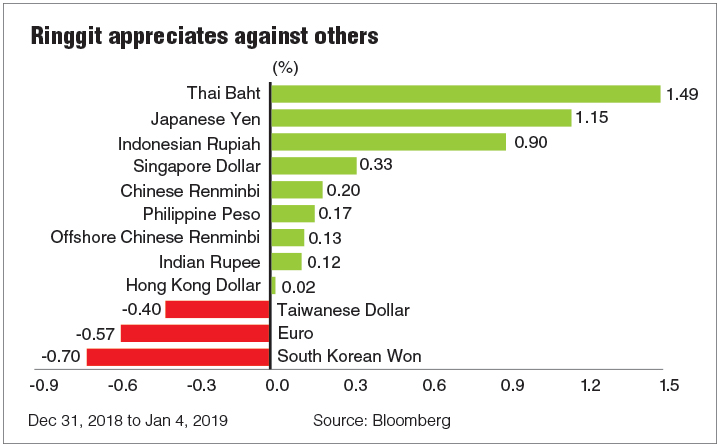 KUALA LUMPUR: After a largely depreciative 2018, the ringgit appreciated last month on the back of a softer US dollar, coupled with a rebound in crude oil prices.

However, spot returns on the local unit picked up — not just against the greenback, but also a slew of other currencies.

The US Federal Reserve (Fed) revised interest rate hike expectations to two times this year, from thrice in its initial estimate.

Pundits are more optimistic; some expect the rate hike to pause — at least in the first half of 2019 (1H19) — amid economic slowdown concerns.

“[The Fed rate hike revision] is positive to emerging market currencies as there seems to be less impetus for the greenback to strengthen,” said MIDF chief economist Dr Kamaruddin Mohd Nor when speaking to The Edge Financial Daily.

However, it does not explain why the ringgit has outperformed selected Asian currencies since last month. In the period, it lagged behind only the Japanese yen, the Thai baht, and the Indian rupee (see chart).

Understandably, the yen is a haven for investors amid the recent shakiness of the greenback.

Others, like the Philippines, also post a high GDP growth estimate by IMF at 6.5%. Still, it represents a second consecutive year of slowdown.

Kamaruddin pointed that while Malaysia’s GDP growth is expected to moderate to under 5% in 2018, the ringgit has another support, namely the country’s oil exporter status.

“Despite some volatility, the view is that crude oil prices may be trending upwards this year, as they are again moving from a lower base at the beginning of the year,” he said.

Brent crude is currently trading below US$60 (RM248.16) per barrel. If the oil benchmark climbs, this time the ringgit could theoretically benefit without the pressure of a strengthening US dollar exemplified last year, as well as the uncertainties that rose soon after the 14th general election in May.

Compared with Malaysia, rising energy prices put more pressure on the currencies of other emerging countries like the Philippines and Indonesia. The central banks in these two nations have increased interest rates numerous times last year, partly to tackle inflation.

“Fundamentally, our macroeconomic variables are still intact,” Kamaruddin said. “Our GDP growth may have moderated on an aggregate basis, but domestic-driven sectors such as services are either stable or expanding,” he said.

The next meeting for BNM’s Monetary Policy Committee is scheduled for Jan 23. Analysts are mixed on whether the rate will be sustained in light of pressure on the new government to spur economic growth.

Regardless, Kamaruddin feels the ringgit has the right backing to sustain further headwinds this year.

The economist pointed to Malaysia’s sustained low unemployment rate of 3.7%, coupled with positive wage growth of 5.2% and moderate inflation of 1.3%, both recorded last year.

By absolute value, retail trade was measured at RM42 billion [in October 2018]. Its monthly growth [in 2018] would average between high single-digit and low double-digit, which is good. People are spending,” he added.