BANK Negara Malaysia’s efforts over the past few weeks have certainly helped to stabilise the ringgit by reducing volatility.

Exporters have been asked to convert the bulk of their export proceeds back to the local currency, while speculative activity in the offshore non-deliverable forwards (NDF) market has been curbed. On top of that, Bank Negara is also setting up a framework with the central banks of Thailand and Indonesia to facilitate settlement of bilateral trade in local currencies, bypassing the need for US dollars as an intermediary currency.

But there is little that the central bank can do about the persisting strength of the US dollar. As at Dec 30, 2016, the ringgit closed at 4.4862 against the dollar, ending the year at an all-time low.

It may not be the best way to end 2016, but the outlook for the ringgit is relatively optimistic. Economists’ consensus estimates show that the ringgit will end 2017 at 4.33 against the US dollar.

“I expect the ringgit to strengthen to 4.2 to 4.3 against the US dollar by the end of the year. And even at those levels, I believe the ringgit will still be undervalued,” veteran economist Dr Yeah Kim Leng tells The Edge.

Yeah is a member of Bank Negara’s Monetary Policy Committee and dean of the school of business at Malaysia University of Science and Technology.

“If we can maintain our current account surplus, and if commodity prices stay at least at the current levels, there will be strong support for the ringgit to strengthen to those levels. [Should] commodity — crude oil and crude palm oil especially — prices strengthen further, the ringgit may do even better,” he adds.

However, these fundamentals seem to have less bearing on the ringgit. Hence, Bank Negara’s measures are focused on addressing demand for the ringgit in the money market.

The most notable is its ruling that compels resident exporters to convert 75% of proceeds back to the local currency (with the option to reconvert to meet foreign currency obligations). In December alone, the central bank reported RM2 billion in net trade inflows.

Bank Negara announced, “December data indicated that about 57% of the proceeds were reconverted”. This means about RM860 million of foreign currency was converted to ringgit last month.

But this figure is relatively small compared with the daily average volume of US$9 billion of foreign-exchange transactions in December, based on Bank Negara data.

Nonetheless, the intraday volatility of the ringgit decreased by more than half to average 90 points in December, compared with an average of 228 points in November, notes Bank Negara.

Interestingly, the spread between the onshore ringgit rate and the offshore NDF rate has stabilised. As at Dec 30, the three-month NDF rate was 4.5074, only 0.02 higher than the onshore rate.

As part of its continued efforts to reduce dependence on US dollars, Bank Negara has also signed bilateral agreements with the Thai and Indonesian central banks to set up a local currency settlement framework.

It signed the agreement with Thailand earlier last year. In mid-December, however, both countries expanded the framework to include Indonesia.

At face value, increasing the relevance of regional currencies in trade is a move in the right direction to reduce reliance on US dollars as an intermediary trade currency.

Thai and Indonesian products make up 10.3% of Malaysia’s total imports, and are worth RM70.2 billion. Malaysian products exported to the two countries make up 9.1% of its total exports, worth RM69.63 billion.

In practice, however, it may not be so easy to wean exporters and importers from using US dollars.

“The new measures are not likely to have an impact in the near term. Just look at the adoption of the renminbi in trade with China — it is growing, but still very [slow]. And the renminbi is a much larger currency [than the baht and rupiah],” explains an RHB economist.

He adds that China has been trying to encourage the use of the renminbi in bilateral trade for the past three years.

It is estimated that overall, 60% to 70% of global trade is still transacted in US dollars.

“The trouble is, if an exporter agrees to settle in rupiah, baht or renminbi, his raw materials may be transacted in US dollars. The mismatch creates even more foreign currency risk,” he explains.

The US dollar is simply too engrained in international supply chains for exporters to change overnight. Nonetheless, economists say Bank Negara’s efforts are timely, even if they may not bear fruit in the short term.

Against this backdrop, it is interesting to note that the exodus of foreign capital also decelerated in December.

The December data for foreign holdings in Malaysian government bonds has not been released yet, but anecdotal evidence suggests that net foreign selling has also decelerated. Foreign holders sold RM19.89 billion in Malaysian bonds issued by both the corporate and government sectors last November.

In fact, the flow of foreign money might even be reversed in the coming months.

“Excessive US dollar strength is going to work against growth in the US economy and some people have already begun to realise this. Together with rising yields in the US, it could put a dampener on growth after the first quarter [this] year. Even if President Donald Trump undertakes expansionary policies to stimulate growth, those will take time,” explains the economist.

Yeah adds that the US dollar has overshot its fundamentals and should correct in the coming months.

Against this backdrop, the yield gap coupled with the undervalued ringgit will make Malaysian assets more attractive, says the RHB economist.

However, that forecast hinges heavily on expectation that the 14th general election will be concluded in the first half of 2017, explains the economist.

Leading up to the elections, uncertainty will increase and spur more volatility in the market, as well as the ringgit. But once that is over and the dust has settled, economists expect the ringgit to stay on course to end the year better. 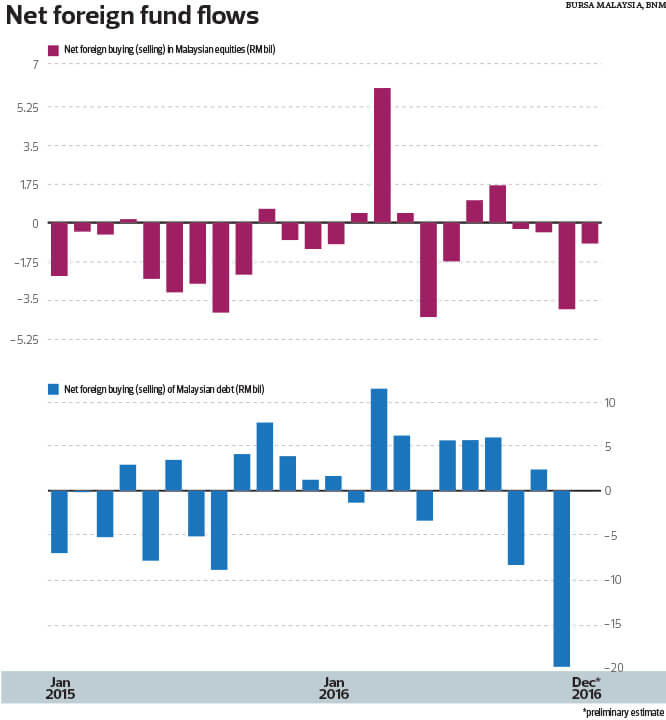 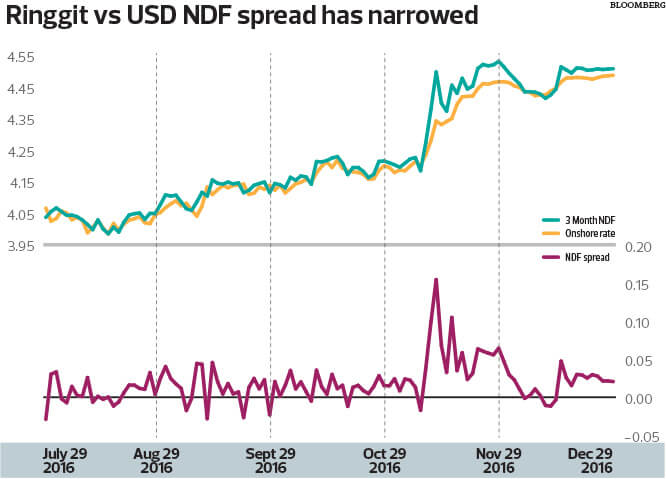