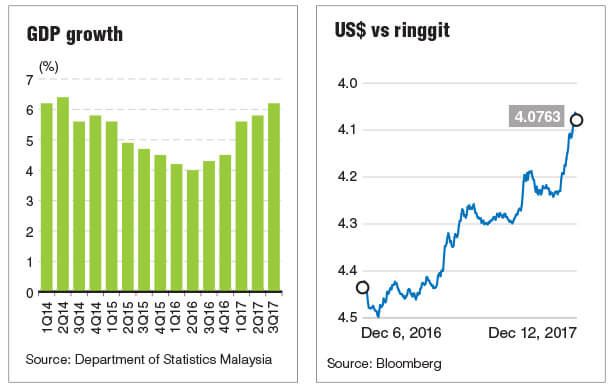 KUALA LUMPUR: Economists see the ringgit strengthening to below the psychological level of 4.00 against the US dollar in 2018 amid expectations of an interest rate hike and higher oil prices, and of the US favouring a weak greenback.

UOB Malaysia senior vice-president of global economics and markets research Julia Goh sees the local currency trading in the range of between 3.90 and 4.05 versus the dollar next year.

IQI Global chief economist Shan Saeed opined that the US dollar would weaken by 3% to 4% against all currencies in 2018.

“In (US President) Donald Trump’s pre-election campaign speeches he said that the US does not need an interest hike and a stronger dollar, but instead a cheaper dollar in order to spur the US economy,” said Saeed.

“On the other hand Federal Reserve (Fed) chair Janet Yellen [favours] a stronger dollar. So policywise both Trump and Yellen were not [on] the same page.

“But now Jerome Powell is coming on as the new Fed chair — he is said to be one who listens to Trump,” said Saeed, who sees the Fed hiking rates once next year, to 1.5% from the current 1.25%.

“This is premised on a weaker dollar, higher oil prices, as well as Malaysia being an important player in the Belt and Road equation. Also, in every election [year] the demand for ringgit goes up. [Hence] we foresee that during the general elections next year, there would be a lot of movement in the ringgit,” he said.

“Key catalysts to keep the beat going in 2018 include higher commodity prices to boost rural incomes and government revenue, infrastructure projects, new economy drivers such as digital and information, communications and technology expansions, fiscal measures such as personal tax cuts, cash aid and budget giveaways which we estimate could inject RM15.5 billion worth of disposable income into the economy,” she said.

“This provides continuous support for consumer spending even after one of the key stimulus measures announced last year expires when the Employees Provident Fund contribution rate normalises at the start of next year,” she added.

“This is because in 2017, GDP growth had risen above expectations as a result of the lower base in 2016, which was due to global economic headwinds in that year such as the UK’s Brexit vote and Donald Trump’s US presidential win,” said Tan.

“However in 2017 we saw a stabilisation in the global economy, leading to the International Monetary Fund revising its global growth forecast upwards [in October] to 3.6% for 2017 [from its previous forecast in April of 3.5%] and 3.7% in 2018 [from 3.6% before],” he told The Edge Financial Daily.

Tan added that the growth story for Malaysia in 2017 had been an export growth one driven by a strong demand from China and a healthy global demand for semiconductors. However, for 2018, it will be domestic demand that would be fuelling economic growth.

“We think that Malaysia’s domestic demand is still healthy and therefore it will cushion the expected slowdown in export growth next year,” said Tan.

Sin Beng Ong, JP Morgan’s head of economic research for emerging markets Asia ex-China, expects Malaysia’s GDP to grow by 5.4% in 2018, a deceleration from the 6% expected for 2017, reflecting a normalisation path for growth.

“We think that the global capital expenditure momentum will have some room to go into the first half of 2018, which will benefit Malaysia, especially in manufactured goods’ exports,” said Ong.

“The other aspect is the strength in commodity-related exports, especially exports of natural gas. While LNG export prices have risen, volumes have increased recently, with the the quarterly run rate reaching 8.2 million tonnes, up from around 7 million tonnes.

“If the recent gains in 3Q17 are sustained, they would deliver US$3billion to US$4 billion in extra annual export revenues relative to the baseline, which already assumes some pass-through from higher crude oil prices, to which natural gas in Malaysia is priced with a three-to-five-month lag,” he added.

For the second half of 2018, Ong expects to see some moderation in view of a slowing global capital expenditure cycle which has driven manufactured goods’ demand, but private consumption will continue to support domestic demand. He said this is at the back of rising Malaysian household income and the expected infrastructure spending.

Ong also said that while there is a concern over rising living costs in the country, there is an overall stability in core prices, in contrast to the noise in headline inflation arising from the monthly adjustments in fuel prices.

Nonetheless, he noted that the government has mooted the idea of mitigating the impact of higher crude oil prices should RON95 petrol prices rise beyond RM2.50 per litre consecutively for three months. This would suggest some insulation of headline inflation from increases in global fuel prices.

Given the expectation of a return to a trend-like cyclical expansion in 2018, Ong thinks that the central bank will raise the overnight policy rate by 25 bps in January, unwinding the 25 bps cut in 2016, which was a pre-emptive move after Brexit.

“Beyond the initial rate normalisation, we expect the policy rate to remain at 3.25% through the rest of 2018. For the rate to move beyond 3.25%, this would likely require a return of Malaysian growth rates back to levels seen before 2008, which would likely require global growth to firmly break out of its recent range and also a sustained pickup in the credit cycle — both of which we deem unlikely in the next year,” he added.

“The assumption here is that the Belt and Road Initiative will partially offset the less-expansionary public investment position and thus should not materially impact overall infrastructure investment,” he said.

Asked about the risks of overdevelopment with China’s involvement as seen in countries like Sri Lanka, Ong said he does not think that it was the same case for Malaysia, pointing to the country’s medium-term roadmap to improve intercity connectivity.

“For example, the MRT system in KL helps to improve intercity linkage, which is an important part of urbanisation … given where Malaysia wants to be in 10 to 15 years with connected cities, all these infrastructure projects will be important,” he said.

Oxford Economics lead Asia economist Sian Fenner expects Malaysia’s headline inflation to moderate to 2.9% in 2018, from an estimated 3.9% in 2017.

“The moderation in the headline figure largely reflects an easing in transport prices which accelerated this year on the back of a recovery in oil prices,” she told The Edge Financial Daily.

“We still expect Bank Negara to start normalising rates with a 25bps hike in the first quarter of 2018 with an increase in the Statutory Reserve Ratio also expected. Indeed, the [central bank] adopted a more hawkish tilt at the last monetary policy committee meeting, signalling a desire to initiate rate lift-off soon.