Ringgit falls to 9-year low against US dollar at RM3.7630 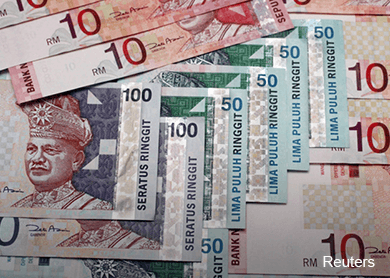 KUALA LUMPUR (June 8): The ringgit has dropped to a 9-year low versus the US dollar, weakening to as low as RM3.7630 against the US dollar, as the dollar strengthened on better US nonfarm payrolls data.

According to MIDF Research, US nonfarm payrolls posted its largest gain since December of 280,000 last month, beating Reuters’ forecast of 225,000.

It said the better than expected payroll data and higher wage increase raises the chance of a hike in interest rate by the US Federal Reserve (US Feds), which will lead to a further decline in the stock market.

“We are expecting this development will further impact the ringgit and KLCI negatively as investors will start to price in the possibility of a faster tightening of monetary policy due to the latest data,” said the research house.

Similarly, AffinHwang Capital Research said the improved data could signal a hike in the US interest rate, as it indicates that the US economy is steadily recovering.

“As the US Feds have previously guided that decision on raising its Fed funds rate will be data-dependent, we believe the impressive report on employment gains provided further assurances to the US Feds that US economy is holding firmly on the recovery path, despite the weak 1Q15 GDP growth.

“William Dudley, the vice chairman of the US Feds, noted recently that ‘it is likely that conditions will be appropriate to begin monetary policy normalisation later this year’,” said the research house.