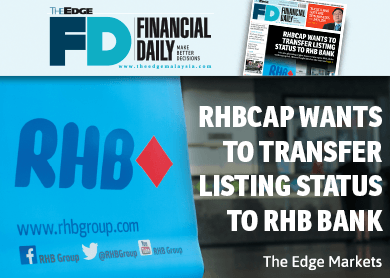 KUALA LUMPUR: RHB Capital Bhd (RHBCap) yesterday proposed an internal reorganisation that will see RHB Bank Bhd take over its parent’s listing status, which confirms a report in The Edge weekly on April 6.

The move will also give the group better capital and tax efficiency for profit growth, he said.

“This is expected to bring us closer to our regional peers and is a catalyst for potential rerating of the RHB Banking Group. We will continue to remain focused and serve our customers to the best of our abilities,” he said.

In a filing with Bursa Malaysia, the group said the internal reorganisation will entail the transfer by RHBCap (fundamental: 1.5; valuation: 2.1) of its entire equity interest in RHB Investment Bank Bhd and RHB Insurance Bhd’s subsidiaries, as well as other operating units of RHBCap which will be determined later, to its wholly-owned subsidiary RHB Bank Bhd.

The total disposal consideration, which is assumed to be satisfied by RHB Bank entirely in cash, is also to be determined later.

The proposed internal reorganisation is to streamline the businesses of RHBCap under RHB Bank with the aim to achieve greater tax efficiency in view of the change from the two-tier tax system to a single-tier tax system as well as to position RHB Bank to spearhead the group’s future growth, said RHBCap.

The group also announced a rights issue to raise up to RM2.5 billion for its working capital and to meet the requirements of Basel III, confirming  the same The Edge weekly report. The issue price of the shares will be determined at a later date.

“In the event that the proposed internal reorganisation is not implemented, the intended gross proceeds shall be utilised to repay the bank borrowings of the company and/or injected as equity into RHB Bank to further capitalise RHB Bank, if required,” said RHBCap in the filing yesterday.

Quoting sources, The Edge had reported that RHBCap was exploring an internal reorganisation to eliminate its holding company structure and directly list its 100%-owned banking unit, RHB Bank, on Bursa Malaysia.

Sources had cited the impact of the Financial Services Act (FSA) on financial holding companies, which resulted in the group having to beef up its capital, and a more tax-efficient structure, as the reasons behind the proposed restructuring.

“Before the regulations changed, one could claim tax deductions on interest payments on debt. In other words, there was a tax shield for income. But after moving into a single-tier tax structure for dividends last year, dividends have become tax exempt. As dividends are tax exempt, there is no income with which to offset tax — the tax shield is gone. So RHBCap’s current structure is tax inefficient,” one source had told the weekly.

Meanwhile, after the proposed rights issue and proposed internal reorganisation, RHBCap said yesterday that it will be distributing its entire shareholding in RHB Bank to entitled shareholders, with RHBCap ceasing to be a shareholder of RHB Bank.

“Upon completion of the proposed distribution and capital repayment, RHB Bank will assume the listing status of RHBCap.

The proposals are expected to be completed by the fourth quarter of 2015.

This article first appeared in The Edge Financial Daily, on April 14, 2015.