RHB Capital Bhd
(Jan 28, RM7.81)
Add with a target price (TP) of RM10.50: With merger talks called off, RHB Capital (RHBCap) can fully concentrate on its transformation programme dubbed Ignite 17. In terms of earnings growth, we expect the lender to “outperform” most of its peers in 2015 due to the benefits from Ignite and above-industry loan growth.

We are positive on the implementation of the Ignite 17 transformation programme as this would help the group improve in the areas that it has traditionally been weak, like Islamic banking, treasury, small and medium enterprises (SMEs), and exposure to the mass affluent market. The group will benefit from key initiatives like the launch of group treasury operations, realignment of Islamic banking, and SME business models as well as the introduction of wealth management services in Singapore.

We think that RHBCap would “outperform” most of its peers in terms of earnings growth in 2015 because of: (i) its above-industry loan growth; (ii) benefits from the implementation of Ignite 17; and (iii) good traction in investment banking income.

RHBCap is projected to turn in a healthy net profit growth of 9.7% (and earnings per share [EPS]growth of 9.2%) in its financial year ending Dec 31, 2015 (FY15). This would be supported by an expected expansion of 6.4% in net interest income and 9.7% in non-interest income. Cost-wise, overheads and loan loss provisioning would rise by 6.4% and 11.1% respectively.

The group has shelved its mergers and acquisitions plans in the near term, including those in overseas market, given the unconducive environment and its low valuation, in our view. This would slow down the pace of regional expansion in the short term, but we believe that it is still adamant on becoming a regional banking group in the longer term.

We cut our projected FY15 to FY16 EPS and dividend discount model-based TP (cost of equity of 11.8%; long-term growth of 4%) to factor in the higher cost of funds. RHBCap is rated an “add” and our top pick for the sector given its: (i) attractive valuation; (ii) above-industry loan growth; and (iii) expanding investment banking business. — CIMB Research, Jan27 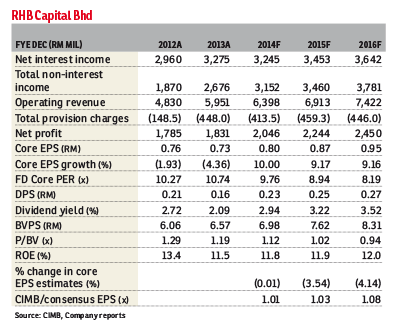