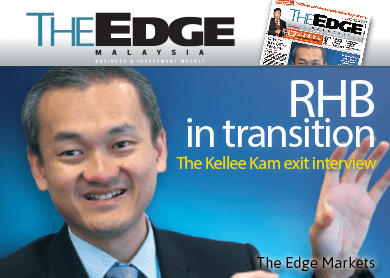 KUALA LUMPUR (April 25): RHB Capital Bhd’s (RHB Cap) outgoing group managing director Kellee Kam believes that the reorganisation of the group comes at an opportune time, according to the Edge weekly in its latest edition.

In an exclusive interview with the Edge’s Joyce Goh and Adeline Paul Raj, Kam said this was the wisdom from RHB Cap’s board.

“They say that in business, there are seasons. When it’s summer or autumn, you go out, make the best of it. You farm, you build your business. But when it is winter, don’t go out and start planting or hunting. You are not going to get good deals, you are going to do yourself harm.

“We believe that things will start to slow,” the Edge reported as him saying.

The magazine quoted Kam as saying that this year, a lot of the banking group’s focus really was on getting moreeffi ciencies in productivity, in people, in its cost and capital base.

“Part of this led to the reorganisation. It is a reorganisation that tries to address, frankly, multiple things at the same time and underlying it all, we believe that it will create additional shareholder value,” it reported Kam as saying.

The Edge quotes Kam as saying that despite the tougher operating environment, RHB Cap’s IGNITE 2017 transformation vision was “very much on track”.

“The one major outcome that I have guided to the market that will change is how aggressive we will be in overseas expansion,” he says, adding that the target for overseas contribution by 2017 will be revised to 20%, rather than 30%, of group revenue” it quoted him as saying.

Kam said the focus [on expanding overseas] would be on a less capital-intensive route.

He said that there was a possibility that the investment bank will be used to spearhead that.

“A regional network makes the most sense for our investment banking platform to capitalise on fl ows. In our mind, it doesn’t make sense to push for 30% in the current environment,” Kam said, adding that the two missing markets were Indonesia and the Philippines.

On the reorganisation, the Edge reported Kam as saying the recent  changes in the industry and the regulations — such as consolidated capital ratios under the new Financial Services Act 2013 — had made the current structure of the group inefficient.

Thus, he said the group was undertaking an internal restructuring and a rights issue that would result in the banking business — RHB Bank Bhd — taking over the listing status of RHB Cap. The proposed rights issue of new shares is expected to raise up to RM2.5 billion.

For details on the RHB transition, please get a copy of the Edge weekly edition for the week of April 27 – May 3 available at newstands now.