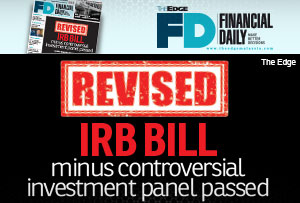 KUALA LUMPUR: The revised Inland Revenue Board (Amendment) Bill 2014 was passed in Parliament with a voice vote yesterday, with Barisan Nasional BN) lawmakers’ “ayes” drowning out the “nays” from Pakatan Rakyat legislators, after provisions for the controversial investment panel were scrapped.

The bill originally proposed that an investment panel be set up in the Inland Revenue Board (IRB), which would allow the finance minister, a post that is held by Prime Minister Datuk Seri Najib Razak, to appoint six out of the seven board members of the panel, prompting criticisms that the bill, if passed, would allow IRB to make investments using taxpayers’ money; it would also have allowed the finance minister too much say in the matter.

Deputy Finance Minister Datuk Ahmad Maslan, in tabling the second and third reading of the bill yesterday, said the IRB would only invest any extra money from the fees it received for collecting taxes for the government.

“Our initial intention was for the extra money, after taking into account the administration costs of the IRB, to be used for investment purposes. But because of the controversies surrounding the issue, we have decided to take into consideration their views.

“It, however, does not mean that we [would] run it carelessly,”Ahmad Maslan said in response to Pokok Sena MP Datuk Mahfuz Omar, who was criticising the government’s poor judgment in putting forward a proposal to set up an investment panel back in June, only to withraw it months later.

Ahmad Maslan, who postponed the second and third reading of the original bill in June after it had sparked criticisms from various quarters, added that the government would soon decide on the fees or percentage to be paid to the IRB in the future for its tax collection service. “I arrived at Parliament at 9am today (yesterday) and was pleasantly surprised to find that the IRB Bill has been amended yet again to remove the creation of the investment panel. We (PKR) won! This is a timely victory to savour for the rakyat,” PKR MP for Kelana Jaya Wong Chen told The Edge Financial Daily yesterday.

Wong, who called on Putrajaya last week to reveal the amended draft bill to opposition lawmakers ahead of the current sitting to prepare to debate it, said the government had carried out a committee stage amendment to withdraw the investment panel before Parliament’s session began this morning.

Four clauses that were previously in the proposed IRB bill for the setting up of the investment panel had been retracted but a clause to grant the IRB the power to establish companies, despite calls to also scrap it by opposition lawmakers — as well as one BN man, MP for Titiwangsa Datuk Johari Abdul Ghani — was retained.

The clause allows the IRB, with the approval of the finance minister, to establish companies under the Companies Act 1995 (Act 125) to carry out or engage in any project, scheme or enterprise which has been planned or undertaken by the IRB.

The revised bill that was tabled and passed yesterday confirmed a report by The Edge Financial Daily on Sept 22, quoting sources, that the investment panel would be scrapped. The report also stated that the bill was likely to be tweaked to allow the IRB to earn better rates instead.

Its balance sheet as of Dec 31, 2011, showed that the IRB had RM255 million in short-term fixed deposits with licensed banks.

This article first appeared in The Edge Financial Daily, on October 8, 2014.