Retailers see mixed results from jumping on the e-commerce bandwagon 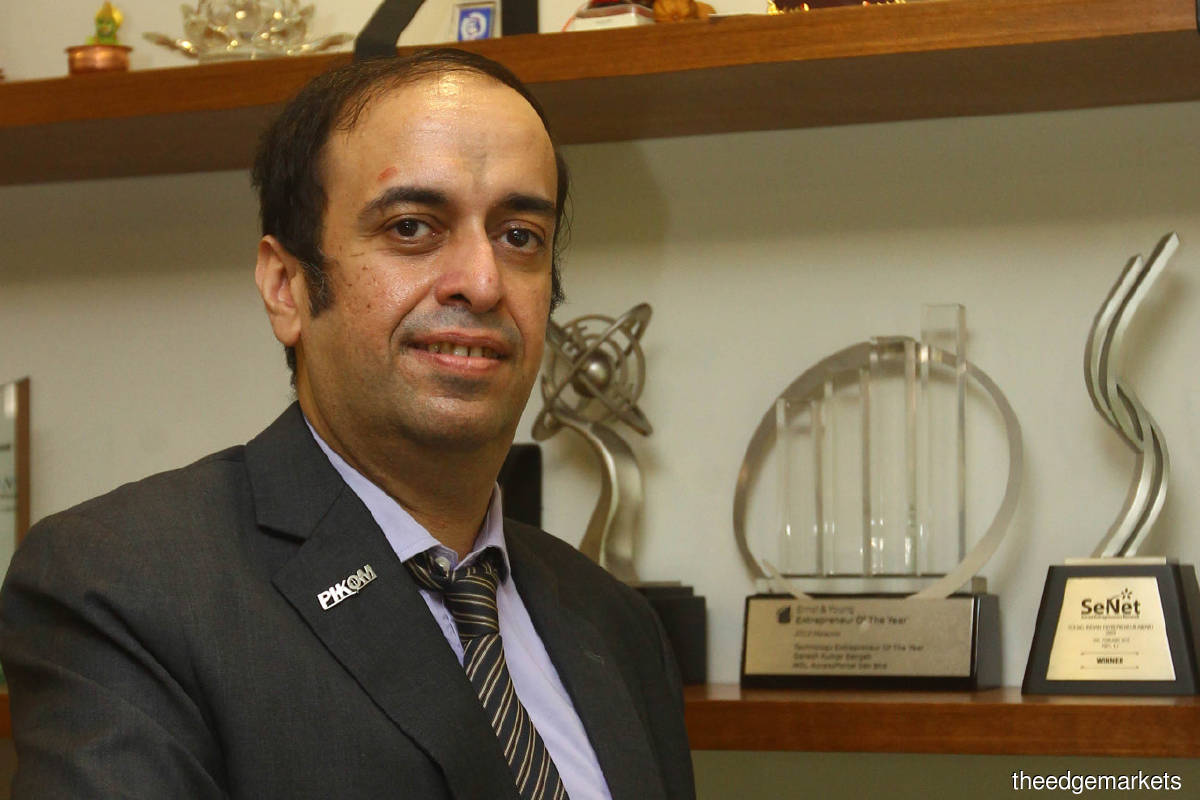 AS Malaysian consumers shop less at physical stores due to Covid-19 stay-at-home orders and country-wide lockdowns, retailers have been forced to accelerate their efforts in the digital space in order to retain customers.

According to reports, the gross merchandise value (GMV) for e-commerce in Malaysia was estimated to have easily more than doubled last year to around US$6 billion from US$3 billion in 2019, says Commerce.Asia executive chairman Ganesh Kumar Bangah.

“We forecast that this year, the e-commerce industry will grow 50% to around US$9 billion to US$10 billion as people become more familiar with the online platform. There’s more trust about buying online, coupled with the logistics infrastructure getting more mature.

“E-commerce has indeed revolutionised consumer buying patterns with many households now turning to the convenience of shopping online,” he tells The Edge.

The majority of listed retail companies on Bursa Malaysia have ventured into e-commerce. However, have their online platforms been successful in driving sales in the wake of the pandemic?

Looking at discretionary consumer stocks in the retail space with a market capitalisation above RM150 million, many have shown a significant increase in online retail sales in recent times. Nevertheless, it is worth noting that this only comprises a small percentage — below 10% — of these retailers’ total revenue.

So, it would be realistic to say that the online sales channels have not made up for the loss of footfall to physical outlets last year, given that many retailers posted weaker earnings or losses for the quarter affected by the Movement Control Order (MCO) implemented on March 18 last year.

One retailer that has seen its online retail sales grow significantly since the MCO is InNature Bhd, the holding company of The Body Shop.

For the cumulative nine months ended Sept 30, 2020 (9MFY2020), InNature’s e-commerce platform contributed RM9.83 million, or 8.9%, of the group’s revenue. This is a marked improvement from the previous year, when it reported revenue of RM4.14 million, or 3%, through e-commerce.

“Despite expected weak retail sales, we believe that this will be offset by a pickup in e-commerce sales, which we gather rose 2.5 times year on year (y-o-y) since the reinstatement of the Conditional MCO in early 4Q2020,” notes CGS-CIMB Research in a report dated Jan 22.

InNature managing director Datin Mina Cheah-Foong, in a previous interview with The Edge, had said that the group believes in an omnichannel approach for its Malaysian business — getting people to shop online and offline. The group is said to be among the major cosmetics companies to jump onto an e-commerce platform early, from 2012.

CGS-CIMB Research also notes that the group’s new channels, such as call-and-collect and click-and-collect, have seen increased transactions since 3Q2020 and sees them as crucial channels during MCO 2.0, which started on Jan 13.

For 9MFY2020, InNature achieved a revenue of RM110.55 million, down 20% from a year ago, while net profit declined 44% y-o-y to RM12.47 million. Its Malaysian business contributed about 62% to group revenue, with its Vietnam and Cambodia units making up the rest.

The group, which made its market debut last October, revealed in its prospectus that for the financial period ended (FPE) June 30, 2020, a cumulative six-month period, e-commerce sales, which included bulk sales to corporate third parties, increased to RM17 million, representing 1.6% of the group’s revenue for that period.

It is worth noting that the bulk of MDGB’s sales during that period were from the household and furnishing segment, which included face masks.

Nevertheless, e-commerce sales were better than in the financial year ended Dec 31, 2019, which only amounted to RM5.8 million, or 0.3% of total revenue.

Notably, sales rebounded quickly in May last year after movement restrictions were eased. CGS-CIMB Research opines in a Jan 28 report that this is due to MDGB’s product offerings, which are less discretionary in nature.

Mr DIY has an extensive network of 688 physical stores as at September 2020 across Malaysia and Brunei, which the research house believes gives it an advantage over other e-commerce players.

“This is underpinned by Mr DIY’s rapid expansion, especially in suburban and rural areas, putting its stores in accessible locations closer to the consumers, diminishing the need to order products online, especially when delivery costs and time are factored in,” it says.

Meanwhile, integrated optical care company Focus Point Holdings Bhd had ventured into online retail for a few years, but it was only during last year’s MCO that its e-commerce platform gained traction.

“We have done quite okay since the MCO last year ... [online sales] improved a lot [from previous years]. We have now included virtual try-ons for our optical business,” Focus Point CEO Datuk Liaw Choon Liang tells The Edge.

Customers shop for sunglasses and disposable contact lens on its online platform and are mainly the younger generation.

Liaw says Focus Point’s e-commerce platform will be starting a subscription plan for contact lens next month, offering more convenience to customers. “Online sales still represent a small number (for the group), but it is encouraging growth. This year, I think it will hit about RM3 million to RM4 million.”

RM4 million in sales would represent about 2% of the group’s total revenue if FY2019’s total sales of RM191.03 million is used as a benchmark.

Liaw believes online retail is the business model for the future and is going for an omnichannel approach for Focus Point’s businesses. The group has invested over RM1 million on its online platform, he notes.

“For businesses like ours, it’s different because consumers still need the optometrist, they will still need to visit the physical store to get their prescription glasses. But, going online still has big potential and that is why we are going for the omnichannel approach now.

“For the next two years, I believe we can see double-digit growth from sales on our e-commerce platform,” he says.

However, the growth of apparel retailer Padini Holdings Bhd’s e-commerce channels remains lacklustre, AmInvestment Research says in a Dec 9 report, with online sales contributing to less than 1% of total revenue.

In terms of percentage contribution, it has not changed compared with pre-pandemic times.

Market observers say one reason Padini may not have wanted to grow its online sales in a big way even before the pandemic could be that profit margins are lower for online sales.

“Margins can be razor thin for online fashion retailers, especially if the return rates are high, which is normally the case compared with physical store sales,” notes an observer.

Nevertheless, the group started shipping to international markets such as Singapore since last October.

In its 2020 annual report, Padini says it will continue to leverage technology for business growth but believes that for the industry, “touch and feel” and bricks-and-mortar stores are important for the customer experience — something that cannot be replicated in the digital world.

It says it is working towards a direction where bricks-and-mortar as well as the online retail model can complement each other to provide a richer shopping experience for its customers.

“Generally, Padini is increasing its online distribution efforts through its own website as well as other online shopping platforms such as Lazada and Shopee. We notice that its CNY promotions have been very well received of late. One of its online strategies is promoting through Facebook Live, which has gained positive comments and close to 34,000 views for one of its recent sessions,” says MIDF Research analyst Ng Bei Shan.

Even as the listed retailers have seen varying results with their online endeavours during these pandemic times, Commerce.Asia’s Ganesh believes that retailers everywhere should not only pay attention to their online presence but also need to invest in performance marketing to ensure that they capture online customers.

“Whether you like it or not, the future is going to be online. The beautiful part about advertising online is that you can actually get a return on ad spends, meaning you can calculate how much you get in revenue for every dollar that you spend on advertising.

“It’s about investing in influencer marketing, performance marketing and so on. The problem with online today is that there’s a lot of competition from foreign players that are investing a lot of money in digital marketing and have better expertise in executing online campaigns,” he explains.

The online marketplace is really crowded, notes Ganesh. In certain categories, over 90% of the products listed online are from overseas sellers. When prices of locals are not competitive enough and there is no urgency to get a particular product soon, consumers tend to lean towards the lower-price seller.