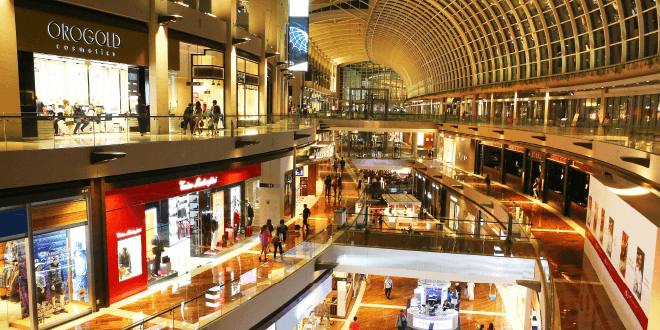 WHEN Marina Bay Sands, Singapore, first opened its doors in 2010, it set the benchmark for integrated resorts globally. The iconic three-tower mega resort is now one of Asia’s hottest tourist spots, and along with it, the resort’s award-winning premium luxury mall, The Shoppes at Marina Bay Sands, has also set new heights in the retail scene, housing the largest collection of luxury labels under one roof within the region.

Five years on, The Shoppes is still unparalleled in terms of concentration of luxury brands, and after an 18-month-long luxury retail remix exercise, the mall now contains 270 boutiques within its almost 800, 000 sq ft space.

With that, The Shoppes is finally coming into its full vision. “It’s only starting to come into focus now,” says John Postle, vice-president of retail for Marina Bay Sands “The change out there is reflective of that vision we had … to realise a true luxury offer, capitalising on the retail and demand for flagship space within the property.”

Calling the mall’s evolvement in the last few years “dramatic”, Postle says that the full-scale luxury vision was always in the pipeline, except that economics dictated at the early stage that the market wasn’t ready for that bigger footprint.

One of the key exercises of the remix was to create more “duplexes” and “triplexes”, following in the vein of the now iconic Louis Vuitton “Island Maison” Crystal Pavilion perched on Marina Bay. Under the expansion, about 38 of the mall’s existing brands were able to up their offer to a flagship shop front or at least new concept stores.

The concepts of some of the stores here are simply outstanding. Prada’s triplex store now dedicates an entire floor to menswear and brands such as Bulgari, Cartier and Dior also now house their largest stores within the country in the mall. French fashion house Chanel has a stand-alone beauty and fragrance boutique, while Versace’s duplex is the largest in Southeast Asia.

The remix was done to ensure that its retail partners can now deliver their full line of products and collections, not just the typical accessories line usually available in this part of the world.

“We were getting feedback from our luxury tenants that their customers were getting annoyed that they were not served the full line of products,” says Postle, highlighting that some of these boutiques now take up 7, 000 to 9, 000 sq ft of space.

The remix exercise also brought in new brands into the scene, and it’s not simply about replicating brands in the regional and local markets but bringing in exclusive brands. “We’ve been able to focus a lot on opening new-to-market brands,” points out Postle. The result has been the introduction of 30 over brands — within a dedicated boutique or flagship space — to the Singapore retail scene, some debuting for the first time in the region such as Tom Ford, Hackett, Proenza Schouler, a.testoni, Church’s and the Hermès Watch boutique.

As for return of investment for these brands, the statistics speak for themselves. In the first year of the opening, The Shoppes saw a revenue of US$138 million (RM498 milliom). Since then, the mall’s revenue has increased at an average of 10.7% year after year, recording US$169 million last year in revenue despite a drop in tourist visits to Singapore overall.

Postle credits the integrated resort’s unique model and strategic location for the stellar growth. “We are in a growing market place with high visitation, and it has global appeal. All our boxes that we need to tick have been ticked,” he adds.

Elaborating about the mall’s unique concept he says: “Being part of the greater integrated resort, it’s not always about the bottom line, it’s about what’s in the best interest of the tenancy mix and that mix includes an “under one roof” combination of theatre, a convention centre, celebrity restaurants, a museum and a 2,600-room hotel that has enjoyed an average 99% occupancy rate since the day it opened its doors.”

Strategic location aside, Postle concedes there is a propensity for Asia to be recognised as great shopping destinations, the huge interest in luxury brands here undeniably contributing to the success of the mall.

“Having such an appeal to a broader level of audience, we see all sorts of markets beyond Asia, those in the other end of the world are coming here,” says Postle.

Coming into the integrated environment such as Marina Bay Sands, says Postle, takes the retail frenzy up a notch higher. “It’s like strapping on a ‘turbo charger’ — it goes with these elements and drivers that the integrated resort brings,” he says.

Citing fashion as its most successful segment last year in terms of sales, due to the volume of fashion stores within the mix, Postle also credits the high concentration of luxury for a relatively easier process of segmenting their brands. “It’s kind of like a special sauce recipe,” he quips, “but I would say the way we approach it and the way other retail malls do is different.”

“Generally it’s just less about precincts and more about ensuring that the adjacencies are fair and desirable… we are not reliant on a giant supermarket, or a particular departmental store.”

And while Postle is not keen to jump the gun on what the end goal is for The Shoppes, a move he calls “dangerous” in such a dynamic and ever-evolving industry, the vice-president  believes that the luxury retail complex has the key flexibility to move with consumer needs and wants within the next few years, together with the know-how of its retail partners.

“We’ve only been open five years now, not all of it as a fully-fledged mall. So we’re really still in our infancy,” concludes Postle. “To be able to reach the results we’ve achieved within that short window is extremely comforting to know that you’re getting the recipe right.”