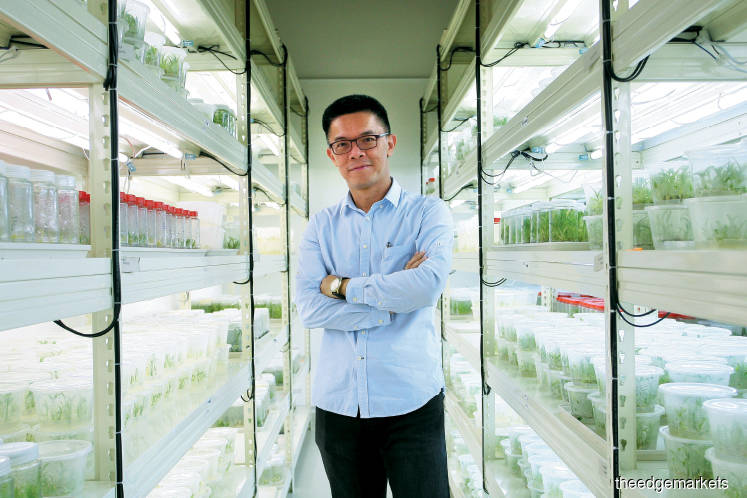 When we set up this company, we knew that we could not recreate the old rainforests. But at least we could stop people from going to the remaining native forests. > Law

Deforested land can lose its value very quickly if it is not managed well. Shrubs and bushes may overtake it and trees of lower value may sprout in place of the older ones that took millions of years to develop.

But the incessant demand for high-quality wood may cause some native forests to be logged. El Law, founder and CEO of biotech conglomerate Revongen Corp Sdn Bhd, did not want to see that happen. He wanted to encourage landowners or loggers to plant economically valuable trees on deforested or abandoned land so they do not have to seek more wood from native forests.

Law set up the Green Afforestation International Network Sdn Bhd (Gain-Green) in 2015 to implement such initiatives. He visited several countries and found a type of tree — Paulownia — that could serve as an alternative to the existing types. Last year, the company was chosen as a Bioeconomy Transformation Programme Trigger Project under the Malaysian Bioeconomy Development Corporation Sdn Bhd — an agency under the Ministry of Science, Technology and Innovation.

“In the last few years, we have travelled to the US, Spain, Vietnam and China to study the tree. It is not a tropical tree so I tried to acclimatise it to our country. We managed to do that with some work in our tissue culture lab. So, we now own a clone called the RevoTropix Paulownia. This special species grows pretty well in our country and we think it is the right species to use for Malaysia’s alternative wood supply in the future,” says Law.

The clone is nurtured in the company’s lab where row upon row of glass jars with young shoots can be seen.

The fast-growing Paulownia has long been touted as a solution for reforestation. It is native to China, but is also planted in the US, New Zealand, Australia and Europe. This is not the first time the species has been brought to Malaysia, says Law. There are other companies in the country that are also working with the tree.

“Some people tried to plant it 20 years ago. They brought it to the Forest Research Institute of Malaysia, but it was the wrong species and it couldn’t grow in our weather. There are a couple of groups in the market right now trying to bring it in from China, but it is also not the right species. Only our RevoTropix species can grow well. So, that is what makes us a little more special,” says Law.

Gain-Green will work with landowners to plant this species of Paulownia on abandoned or deforested land. It takes about six years for the tree to reach maturity. Along the way, the company will assist in nurturing the trees and looking for buyers in the market. According to Law, there is high demand for Paulownia wood in Japan, China and Europe.

“When we set up this company, we knew that we could not recreate the old rainforests. But at least we could stop people from going to the remaining native forests. We set up the company with the mission of making sure that in the future, the wood supply will not come from native forests because they take hundreds or even millions of years to grow. Once you chop them down, there is no way back,” says Law.

Paulownia grows very quickly. It is a higher-priced wood and can fetch between US$400 and US$600 per cu m, says Law. For the tree to be marketable, it has to grow to at least 40cm to 50cm in diameter. The trees in the plantations, which are 23 months old, already have a width of 26cm.

“It is not a new wood. You can just Google and find it. Most people know about Paulownia, except for Malaysian manufacturers, who are more used to native trees. In other markets, especially Japan, Paulownia is considered one of the more common and valuable trees,” says Law.

Paulownia is currently used in guitars, the inner fitting of pianos, surfboards, boats and indoor furniture. The wood is light, straight and strong, earning it the nickname “aluminium of timbers”. However, it cannot replace all other forms of timber, especially in construction.

Law has a degree in biochemistry from Universiti Kebangsaan Malaysia. When he first had the idea to start the company, he recruited his university mates, who hailed from different fields, such as psychology, communications and business, as well as a few friendly investors. He also convinced some investors and landowners to work with them using a contract farming structure.

“They actually own the farms and trees, which they contract us to plant. We spell out the profit-sharing terms because it is a long-term project,” says Law.

“If they do not have the money, then we will raise it together. Or we could do it in such a way that the landowners plant a tree and our group plants a tree with them, so that they trust us in that we are doing the project together.”

This is a contrast to other companies in Malaysia that just sell seedlings to their clients.

Depending on the clients, the contract could stipulate that Gain-Green will partner them for two or three rounds of planting before leaving the trees to them. So far, the company has three plantations of it’s own in Rembau, Rawang and Pilin, Negeri Sembilan. It has another 100-acre project with a landowner in Lojing, Kelantan; a project in Pahang with Agensi Dadah Kebangsaan and an afforestation project in Sarawak.

Finding buyers for the wood is important to ensure that the investors and landowners can get a proper return on their investment. Law says the company has some standing orders from Japan and he knows that it can sell the wood to several other countries as well. However, as it takes six years for the trees to mature, the company is still developing the market for Paulownia, especially in Malaysia.

“We are also developing the secondary market. So, we are not just limited to selling wood. We are working to come up with our own products such as biochar, water and air purifiers and soil enhancers. These are the three major areas we are working on right now,” says Law.

Gain-Green recently launched its biochar product, which is used for air purification. Biochar is a type of charcoal produced from plant matter and stored in soil as a means of removing carbon dioxide from the atmosphere.

The company will plant other crops such as bananas and ginger to supplement its income while waiting for the trees to mature. It started a ginger farming operation two months ago that allows investors to contract the company to plant ginger. The plant matures quickly, taking about a year, so it will provide more immediate revenue. Law has also been invited to countries such as Indonesia and Myanmar to transfer seedlings and technology for reforestation.

Gain-Green is constantly looking for new partners, although it has to work with landowners who understand that it will take some time to harvest the wood, says Law. Its investors are typically institutions or companies and it only works with those that have more than 50 acres for the project to be feasible.

“The average cost per tree that you have to invest in for about six years is RM200 to RM330, depending on conditions such as the land size and project scale. But when you harvest a tree, it can be sold for about RM800 to RM1,200 — raw or processed,” says Law.

“We are actively looking for good land to plant more trees and we are looking for investors who really believe in us to work with us on joint ventures. We hope to extend our business to Sabah and Sarawak, which have some serious deforestation issues. We also hope to cross into Indonesia, Myanmar and other countries in the region.”